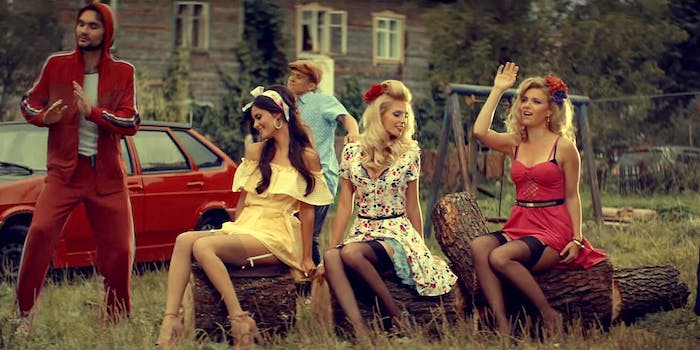 Let's look past Putin for once.

Whether it’s the center of Moscow or the far-flung reaches of Siberia, there’s no more ubiquitous presence in Russian cafés than a flatscreen television playing pop music at full blast. Sometimes there are dozens.

There’s no way of explaining this. Historical evidence does not support the crackpot thesis that the practice is a holdover from the last order handed down by the Presidium of the U.S.S.R.—that command was, evidently, to award a medal to the crew of a submarine.

But as boorish as it may seem, there’s something to be said for having a TV screen pummel you with pop slush anytime you want to eat out somewhere. For one thing, if shared cultural experiences are the fabric of a nation, then the fabric of the Russian nation is certainly… strong? Maybe MTV would still play music videos if every Denny’s and McDonald’s in America kept them on 24/7 at earsplitting volume. Who knows!

Besides, the music video as an art form has a deeply aspirational character that tells us a lot about the values of a given culture. And these days, they talk about tradition and values a whole lot in Russia. Yet even the most cursory look at Russian pop would indicate how fragmented and incoherent these values have become, reassembled as they are in a postmodern pastiche—here, allow me to explain:

I would be remiss to start off this list with any song but Natali’s 2013 hit “OMG What a Man!” as it essentially functions as the ur-text of contemporary Russian-language pop. From the moment it was released, it began playing nonstop in every last public space as if it were the country’s backup plan for raising the birth rate.

The song itself is as straightforward as they come. A man “explodes” into Natali’s life and right away she is singing “OMG, what a man / I want from you a son / I want from you a daughter / And that’s it / That’s it!” That’s really it. She doesn’t even ask for child support.

Later she says that “the man” is like “Dzhonni Depp and Bread Peet in one bottle,” which makes me wonder if she regrets those lyrics post-Mortdecai. Probably not.

Values: A man is very important. Natali does not have much guidance beyond that, however. Be sure to have at least two children.

This, by comparison, is a great video—if not a great song. It combines the venerable practice of the movie-music video tie-in best represented by Coolio’s “Gangsta’s Paradise” with the other time-honored tradition of Bruce Willis’ image promoting strange foreign commodities.

Not only that, but the lyrical content here is incredible. Potap and Nastya are at the movies watching a Die Hard marathon. Nastya doesn’t get it, but she wishes she had a strong man like Bruce Willis, while Potap mansplains the plot to every movie in the series. The chorus is about how Potap is gross and Nastya wants a quote “hard nut” with a bald head. Really!

Best Part: It’s not actually in the video, but thanks to the YouTube comments, I now know that Potap’s verse (1:10) gets the Die Hard timeline wrong. I should note that technically, the duo is Ukrainian, though the song is in Russian.

Values: Most guys are actually creeps who are way too into action films. Aim for Bruce Willis.

This will give you an idea of what life looks like in the Russian countryside—with one exception. While it’s not at all uncommon for Russian country girls to be exceptionally beautiful, the same cannot be said for Russian country boys. The heavily made-up Ken dolls you see in this video look very out of place driving tractors, spitting, smoking, and exercising on whatever pieces of scrap metal one is likely to find in post-Soviet environs.Best Part: (4:10) … >_<

Values: This one is about the country life. If you are a man, exercise and dance shirtless outside to impress the ladies. As for the ladies, Russian pop’s priorities for you are quite clear!

Lyapis Trubetskoy is a Belarusian rock band that makes cool, weird, trippy music videos, which for whatever reason makes me think a close equivalent in America would be Tool. The song is more or less about the contradictions of capital in nominally socialist countries—a classic post-Soviet theme.Best Part: At (0:38) the bridge rhymes “[Karl] Marx” with “Karl Marx,” as in: “Snickers in my left hand / Marx in my right / My PR manager is Karl Marx.”

Values: The video showcases a multi-headed hydra representing capitalism marching past famous Moscow landmarks. It variously displays the leaders of Iran, Belarus, and North Korea (among others) as hypocrites, but one nation is conspicuous by its absence. Which just goes to show that in Russia, you can be as critical as you want, as long as you are not.

“Nikolay” is more of a “traditional” pop song in the vein of a Katy Perry single, provided it were mashed up with the unforgettably saccharine “Barbie Girl” video. There’s an interesting subtext to be found in the self-referential nature of the video, though, which features former opera singer Nikolay Baskov and Natali stuck in a loveless marriage and threatening to divorce one another.

Baskov is one of a few pop stars whose sexuality gets called into question every now and then on the Internet and occasionally even—bizarrely enough—by the state’s own English-language media. So, although I won’t delve any deeper into it, there’s a strong case to be made here for a queer reading of the whole video.

Best Part: This video is way too busy to choose just one part. Just watch it for Baskov’s ridiculous faces.

Values: Like I said, there are a number of ways to read this video. But in the end, they don’t get divorced. They dance a tango. So I guess the message is: “Try and stick with it.”

I’m including this one because both the song and video are very “100 emoji.” To be clear, Timati is actually a rapper (he has a song featuring Flo Rida), and most of his songs are completely different from this one. True to form, however, the song is about leaving “da club” with a lady friend before her girlfriends can snatch her away and escaping for a ride through the Moscow night.Best Part: Every second of it, IMHO.

Values: There are no values whatsoever on display in this song, which is appropriate. And yet, even though it’s an over-the-top parody of the present ’80s obsession in pop music, it’s by far the most sincere love song on this list.

This, on the other hand, is easily one of the worst songs I’ve ever heard. But let’s just say the video raises interesting questions about the possibilities of waging a counter-hegemonic war against heteropatriarchy within the field of pop culture itself. I’m not sure I’m convinced it’s a winning strategy, but Sergei here definitely seems to be saying, “Just go for it!”Best Part: I would suggest that if you watch this, watch it with the sound off and not at work.

Values: Even after years of expensive military research, Russians still have not developed a working gaydar. That, I suppose, is why, as long as you have a couple girls in your video, it’s totally “no homo.”

This is, of course, in no way a scientific guide. Think of these as entry points for you to explore and get acquainted with contemporary pop culture and its own internal conflicts within Russia. Not unlike what happens during the Republican primaries, there is a great deal of talk about values in Russia today, even as mass media dessicate the corpse of the past and serve up a sort of meatloaf mashup version of tradition and history.

But that’s OK! At the end of the day, all ‘culture’ to begin with is a grinding up and assimilation of the past into the present. No matter who’s doing it, the results can never really be accurate or “real.” Eventually these projections of the past and present become reality, and reality itself, or whatever it was before, just crumbles away!

Or, to borrow a phrase from the title of a recent book about Russian media, “Nothing is True and Everything is Possible.” What’s certain is that the flatscreen TVs will play on.