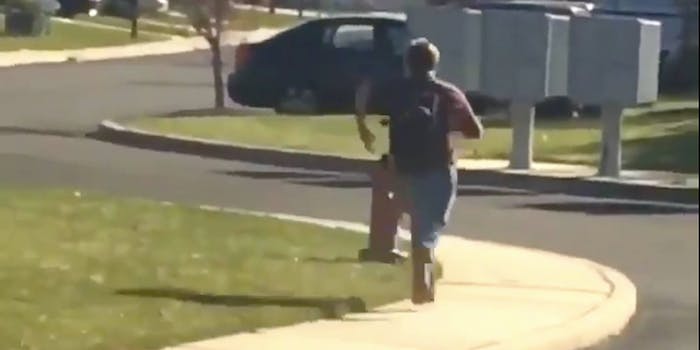 Everyone is obsessed with the mysterious saga of Running Boy Jimmy

The saga of Running Boy Jimmy yields more questions than it does answers.

Last Friday, Bridgewater-Raritan High School student Kyle Kato shared a tweet that captured the “rise and fall of an era.” In the two-minute compilation, a boy known only as Jimmy is seen running home every day after being dropped off by the bus. Until, one day, he doesn’t.

No one is quite sure what to make of Running Boy Jimmy or his sudden change of pace. Why was he running to begin with? Did he have somewhere to be, was he in danger or being bullied, or did he just value ruthless efficiency? And perhaps more importantly, why did he stop?

There’s some speculation that Jimmy may be mentally challenged in some way, but Kato clarified on Twitter that he wasn’t making fun of Jimmy but rather celebrating his uniqueness.

Yall, the video of Jimmy isn't supposed to be making fun of him in any way. It's just meant to be a funny video

People on Twitter have hailed Jimmy as a hero.

Running boy Jimmy is my hero

The legend of running boy Jimmy will live on forever

We’ve reached out to Kato to learn more about this saga. In the meantime, don’t stop running.

Editor’s note: Kato’s original tweet has been deleted. We’ve reached for comment and added a mirror to this story.