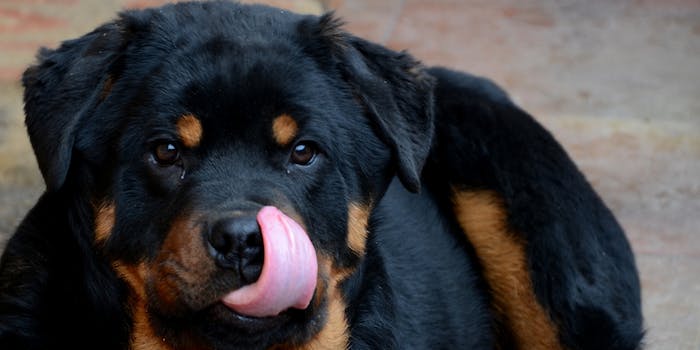 Rottweiler plays tug-of-war with puppy, and everybody wins

To the victor go the chewable spoils!

Making the rounds on Tumblr this week is video of a war of attrition so adorable, you’ll wish all geopolitical disputes were settled in like fashion: a big Rottweiler doing battle with what appears to be its tiny, weeks-old offspring over a long hank of rope. To the victor go the chewable spoils!

The YouTube description promises that a “tenacious puppy plays with big rottweiler,” and the clip does not disappoint. Around and around a deck, as their owners laugh, the two dogs do battle for control of the prized toy, with the young upstart doing better than her relative size or inexperience might suggest.

Even as her Goliath-like opponent gets a good grip and pulls, the pup will not yield, preferring instead to be dragged around and, on one occasion, flipped over, her jaw clamped defiantly on a knot. Of course, the heavyweight here is playing nice, letting the little one score points and assert herself—but we don’t have to hurt her pride by telling her that, now do we.