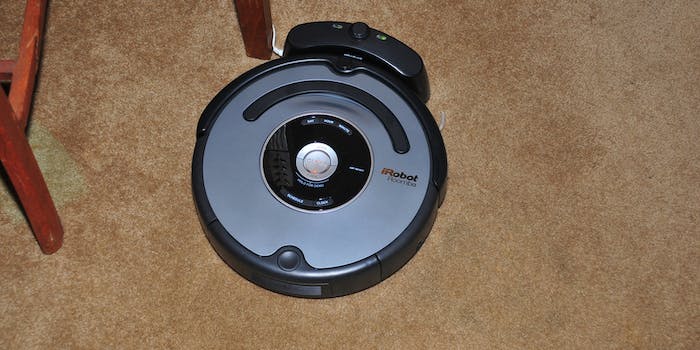 Roomba tries to clean up dog poop, does a crappy job

Don’t try this at home.

Having a Roomba give your house a thorough cleaning while you’re away is certainly a great idea and a sure sign that we are living in a futuristic society. If you own a dog with butt-control issues, however, you may want to rethink your strategy.

Poor YouTube user Rocco DiGiorgio discovered this the hard way in 2012 when he came home to find that his iRobot had smeared dog poop all over his living room. According to his narrative, the device automatically cleans the house each day at 8am—which is right around the time his dog decided that the floor would be the best place to relieve himself.

While DiGiorgio’s ordeal unfolded over two years (and possibly 1 dog) ago, it recently found fresh new life on Reddit. Subscribers to r/videos were quick to poke fun at DiGiorgio’s shit luck.

“I just imagine the roomba running into it the first few times and turning the other way… but over time of bumping into it, gradually spread it out enough where it could keep running it over, like cold butter spreading on bread… then over the course of the day, creating its epic masterpiece,” ironik86 said.

“Dog knew the roomba would make it easier for him to mark his territory i.e. the entire house,” Sugreev2001 said.

Maybe DiGiorgio’s dog had seen one too many “Puppy vs. Roomba” videos and wanted to even the score.