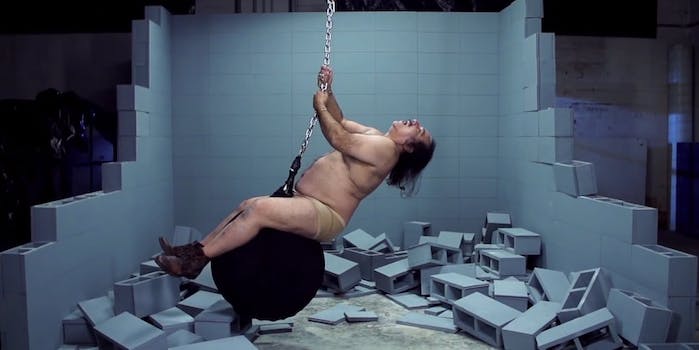 Do not let Ron Jeremy hit you like a ‘Wrecking Ball’

You don't want to watch this. But you will.

Ron Jeremy might have gotten a late start to the “Wrecking Ball” cover game, but what a finish.

Jeremy doesn’t hold back in the shot-for-shot remake of the original music video, which has him doing everything from licking a sledgehammer to rolling around in rubble, wearing pretty much the same outfit Cyrus wore.

And yes, that means sitting on the top of a wrecking ball with nothing but a pair of boots. Jeremy’s crotch is blissfully kept hidden (he’s also wearing nude underwear so, there’s that). This means the clip is suitable for YouTube’s content standards. But to be on the safe side, try not watching this when your boss walks by.

But do you even want to watch it? It doesn’t matter. You will, and you won’t be able to look away, either.