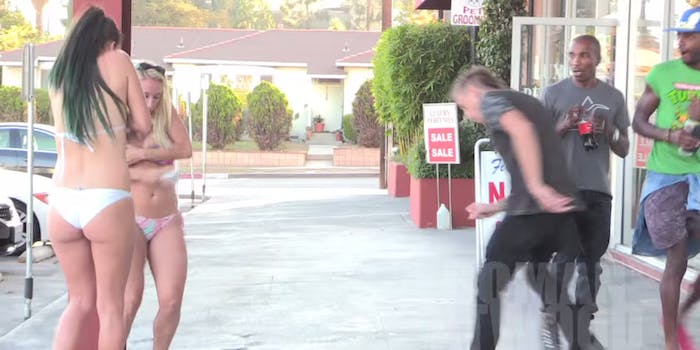 Believe it or not, it’s actually one of the least sexist prank videos of the year.

It’s a damning indictment of the current state of YouTube when a clip of women’s dresses being torn off is actually one of the least sexist prank videos of the year.

Roman Atwood, the 31-year-old hidden-camera auteur behind such classics as “Anniversary Prank Backfires!!” and “Flashing Children Prank!,” is out in Santa Monica pretending to sneeze women’s dresses off. He’s clothed two models, Rachel and Maxine, in tearaway gowns connected to strings. The joke: Rachel and Maxine ask strangers to take their photos. Atwood walks by and sneezes so forcefully that the women’s dresses fly off, revealing—gasp—bikinis. The jaws of passersby drop like anvils.

Like many prank videos on YouTube, Atwood’s “Blowing Girls Clothes Off Prank!!” is irreverent, puerile, and generically, boringly sexist. And yet! No women are sexually harassed. No women are “motorboated” or groped. No women are forced to flee from a stranger’s erection. No women are cornered and made to respond to rape threats. No women are kissed, lifted into the air, or massaged against their will.

In fact, the women in “Blowing Girls Clothes Off Prank!!” are in on the joke, instead of the butt of it. It’s progress, like a prehistoric fish growing a spine.