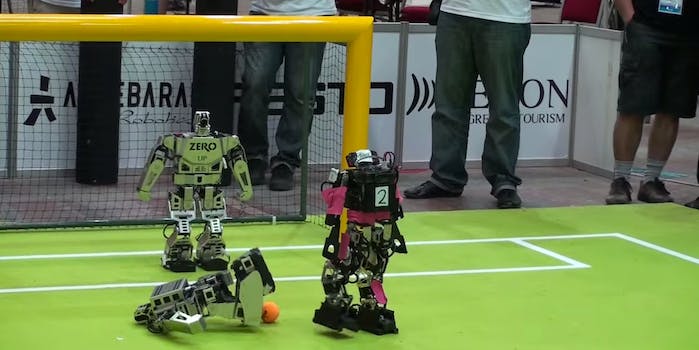 These robots are terrible at soccer

Scientists think robots will dominate soccer one day. It's just not this day.

Most of us can’t bend it like Beckham (or even play soccer at all), but hopefully we’re marginally better than this lot.

It’s robot against slightly different-looking robot in a soccer match during RoboCup, which aims to promote robotics and A.I. research. One day the organization hopes that a team of robots can play a match against the winners of the World Cup—and win.

But today is not this day—and neither was this match that took place in 2012 recently brought back to our collective eyes by Digg. They can barely keep their balance, kick the ball, or be a proper goalkeeper, leaving some of us to joke that it would probably be an accurate description of a friendly inter-office soccer match. It also wouldn’t be anywhere near as entertaining if there wasn’t fitting commentary from Ray Hudson and Phil Schoen.

One of those teams has got this, at least if its players can stand up long enough to score a goal.