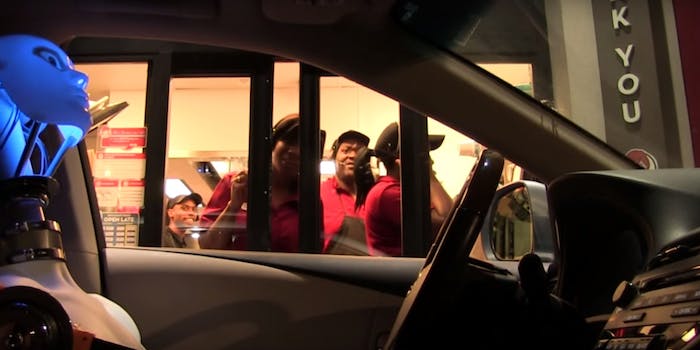 It just wanted to pick up its order.

Working at a drive-thru looks worse than ever. Not only do you have to contend with the regular problems of low-paid fast-food work, but you’re a captive audience for YouTube pranksters like this guy and his fake driving robot.

MagicofRahat built a robot mannequin that looks pretty convincing when “driving” a car. From his vantage point behind the robot’s seat, he was able to scare a whole lot of drive-thru workers into screams and giggles using the talking robot.

This prank is harmless, but you can totally understand why the drive-thru employees are so freaked out. What would you do when confronted with a creepy, glowing robot that inexplicably knows your name and can drives its own car?