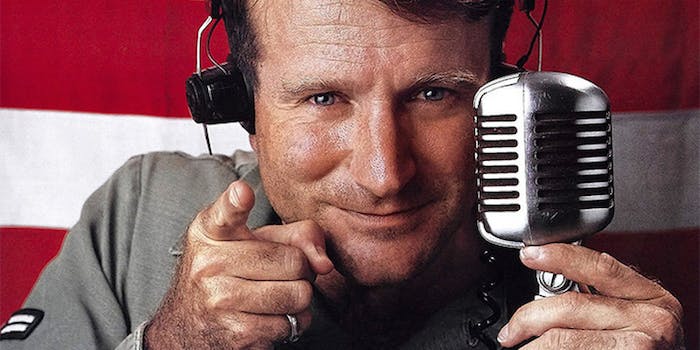 On top of his comedic legacy, Robin Williams should be remembered for his second life as an unabashed and devoted nerd.

When an actor surpasses a certain level of fame, it becomes difficult to think of them as distinctly human. Robin Williams, who passed away this week at 63, was such a titanic force of culture and talent, the very darkness of his apparent suicide seems so unthinkably separate from the always-on persona he made iconic. His film portrayals made him appear as if his only interest was in other people’s happiness, making his struggle with addiction and depression all the more surreal.

Patched in with his inner demons, however, lies another aspect of Williams few would know to celebrate: His second life as an unabashed and devoted nerd.

Williams was an avid gamer, both tabletop (think Warhammer or the original Warcraft) and video games. He named his first daughter after Princess Zelda (from the series that bears her name) and his second son after Cody from the arcade classic Final Fight. He and his daughter did a 3DS commercial during that handheld console’s release, waxing poetic about cutting down grass in Ocarina of Time.

Williams was also a frequent guest at gaming and tech conferences, often jumping onstage to display his legendary knack for improv and his deep knowledge of geek culture. He was a deep tissue member of the PC Master Race, preferring Call of Duty and Unreal Tournament on the computer he built himself with ATI graphics cards.

In his Reddit AMA from late last year, Robin Williams fielded questions from all areas of sci-fi and gaming; he argued that Isaac Asimov’s legendary Foundation series “is one of the greatest books of all time,” singing praise for anime series like Akira, Blood: The Last Vampire, and Cowboy Bebop. To be clear, these aren’t akin, “nerd cred”-wise, to a hack comic doing a Darth Vader impression or dropping a Star Trek reference. Williams was as big a nerd as any of us.

Certainly this is not the badge of gimmickry or uniqueness it might have been when Williams started his career in the 1970’s. Endorsing gaming and geek culture as a whole is a regular part of any media tour. San Diego’s Comic-Con, to take one example, has expanded from a loose brigade of comic book and video game companies to a regular catch-all of fandoms of all sorts, with premiere trailers for Game of Thrones lining up with network sitcom panels.

What separated Williams from the massive rise of geek culture, however, was his relative “normalcy,” as far as the American public was concerned. While it might seem odd to call a comic singularly identifiable by his outrageous personality normal, Williams had arguably the broadest appeal of any actor in the showbusiness. In fact, it’s a testament to his talent that he could spend a decade making family-friendly fare—like Mrs. Doubtfire or Patch Adams—only to spend the next indulging in dark independent movies, World’s Greatest Dad and One Hour Photo chief amongst them.

This is to say Williams was a geek, sure, but never pandering or relying on this aspect of his personality as a gimmick. Patton Oswalt, to unfairly use him for my argument, heavily bends towards nerd culture—almost acting as its official spokesman at times—and tends to be typecast because of it. While it’s certainly no minstrelsy with Oswalt (and other nerd-friendly acts like Brian Posehn, Dan Harmon, and Kumail Nanjiani),  Williams managed to stride that gap between the fringes of niche fandom and mainstream acceptance.

His comedic persona seem to mirror the behavior of our culture, skipping along surfaces of topics and references before settling and plunging deep into whatever fascinates us most. He often felt like our home base, the one thing we can all agree on even as we, like Williams himself, find ourselves delving deeper into our own obsessions.

Bearing the title of “nerd” is useless in the era when even a hideously-reviewed Ninja Turtles movie can walk away with $65 million in its opening weekend. Our culture has both expanded and divided itself into so many never-ending crevices it is merely an amalgamation of separate yet overlapping nerd cultures. And Robin the Nerd served as the perfect bellwether and symbol of this transition. It is just too tragic that, just like many a performer who tried to share the stage or screen with Williams, we find ourselves just catching up as he goes ahead of us.