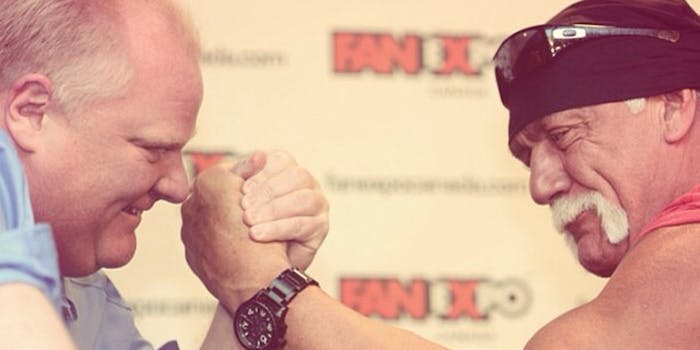 Toronto Mayor Rob Ford—yeah, the guy at the center of Gawker’s crack-smoking scandal pursuit—somehow upset Hulk Hogan. Was it staged?

Toronto Mayor Rob Ford—yeah, the guy at the center of Gawker’s crack-smoking scandal pursuit—somehow upset Hulk Hogan in an arm wrestling contest this morning. Here’s a Vine showing how it went down.

“I own this town, man!” shouted Ford after he beat the pro wrestling legend at Toronto’s Fan Expo. Ford has 16 years on Hogan, but there’s no way he should have taken victory over the 12-time world champion. If you look closely, it seems Hogan actually threw the match.

The contest “encourages people to come to this city, creates jobs and stimulates the economy,” Ford claimed. We’re not sure how that works, exactly.