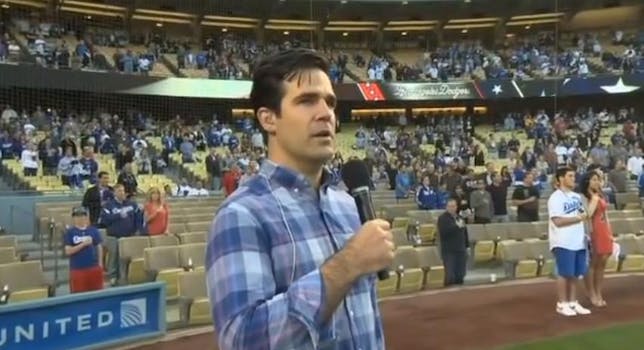 Rob Delaney, Twitter hero to many, conquered a new frontier Tuesday. Or at least he tried to.

Rob Delaney, Twitter hero to many, conquered a new frontier Tuesday. Or at least he tried to.

Starting at noon, Delaney took over Major League Baseball’s main Twitter account for seven hours. If you’ve read anything Delaney’s posted on Twitter, you’d guess that the move was somewhat of a risk for MLB.

Delaney seems to be a fan of baseball. He far prefers it to football, for one thing, and recently sang the national anthem at a Los Angeles Dodgers game. He’s knowledgeable about the sport, and, as one of the community’s most prominent comedians, he tried to liven up MLB’s presence a bit.

But “tried” is the operative word here. Trolling with trivia questions, as with much of the rest of the takeover, came off as a little dull. The jokes weren’t as outlandish as you might expect from Delaney. Granted, he was presumably asked to steer clear of sex and fart jokes, so it was a somewhat sanitized version of his usual spiel.

We expected more from you, Delaney. But we’ll still follow anything you write.

Hint: No one. The Boston Red Sox won that year. I know because I watched Lost.

Time for @robdelaney‘s TRIVIA TIME! Q: Who did the Kansas City Royals beat to win the 2004 World Series?

Did you know you can rearrange the letters in “BASEBALL” to spell “TERRIFIC!”? – @robdelaney

To be clear, I’m not Rob Delaney, the Angels’ pitcher. He is a very good pitcher and nice person probably. I’m not. – @robdelaney

Baseballs were originally made of ham. MLB switched design after President Taft ate 14 balls during the 1971 World Series. – @robdelaney

How come when Matt Kemp takes his uniform off & gives it to a fan he’s a “hero,” but when I do it I “get tazed”? – @robdelaney

Baseball Fact: The nine “innings” in a baseball game correspond to the nine months of pregnancy probably. – @robdelaney

He gave a shoutout to Brandon McCarthy, an Arizona Diamondback known for his wit on Twitter.