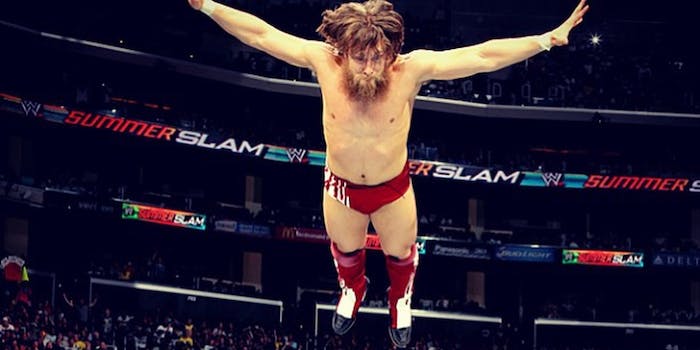 One redditor continues to spoil the WWE's biggest events.

For the past six months, the WWE has struggled to prevent a single redditor from spoiling its biggest events. But if last night’s SummerSlam was any indication, there seems to be no stopping the person we know only as Dolphins1925.

Brock Lesnar defeated CM Punk, and once again Reddit’s wrestling fans knew before it even happened.

Since February, Dolphins1925 has enthralled the social news site’s main pro wrestling community with dead-on predictions for every match at big monthly pay-per-view events. the redditor claimed to have an inside source with knowledge of the scripted results and would post the list of results just as the shows started.

After Dolphins1925 accurately revealed the outcomes for the fifth PPV in a row last month, there was widespread press coverage of this wizard with WWE insider knowledge. Rumors on wrestling news sites and forums suggested the WWE was so eager to out the redditor’s source it was telling employees to write and disseminate fake endings to SummerSlam matches—or even change match outcomes at the last second.

“From the information I have received, WWE Personnel will do anything to ensure I do not go undefeated again. It is my understanding that some of the matches on tonight’s card have multiple scripts,” Dolphins1925 claimed in the SummerSlam pre-show thread. “Therefore, it would be fruitless and deceiving to post all spoilers to an event where the outcomes have otherwise not yet been fully revealed.”

Instead of posting the usual list of outcomes in advance, Dolphins1925 promised to reveal results in the thread and on Twitter if there was “credible information.” The redditor predicted just three of the nine matches (including the pre-show bout) and got them all correct. Dolphins1925 said the script for the main event, for instance, was constantly changing and didn’t offer the outcome beforehand.

Since Dolphins1925 revealed only three results, whatever WWE did to stem the leaks worked to an extent. However, at least one blogger who tracks wrestling betting odds asserted Dolphins1925 is bluffing. He noted Dolphins1925 only predicted SummerSlam outcomes where there was a clear favorite according to the betting market.

Despite the smaller list of predictions, Dolphins1925’s 100 percent accuracy record remains intact. The bigger question is his real identity. Perhaps it’s all just a theatrical stunt by the WWE itself. After all, company chairman Vince McMahon has shown many times he quite enjoys scripting himself into the heart of vast, fantastic conspiracies.