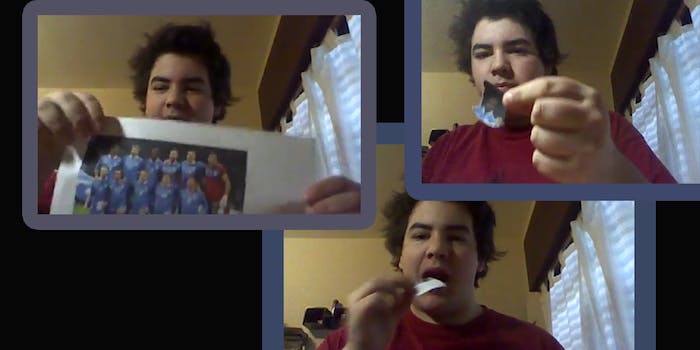 “I hope you find it as entertaining as it was unpleasant for me."

A Reddit user and Italian soccer superstar Mario Balotelli learned a valuable lesson Friday: Don’t make statements you aren’t prepared to own up to.

Prior to the game against Costa Rica in the first round of the FIFA World Cup, Balotelli, a striker, tweeted that if his team won he’d like a kiss from the Queen of England. A win for Italy would’ve kept England in the hunt for a round two berth.

If we beat Costa Rica i want a kiss,obviously on the cheek, from the UK Queen.😂😂😂.

Around the same time, Reddit user ArgieGrit01 was making a bold statement of his own.

“I swear to God, if they [Costa Rica] win I’ll eat a picture of the Italian football team,” ArgieGrit01 commented in a thread on r/soccer.

By Friday afternoon, both men were sorely disappointed.

Italy lost the game 0-1, mathematically eliminating England from the tournament and keeping Balotelli from his kiss.

ArgieGrit01 made good on his promise. He uploaded the following video of him chowing down on a color photo of the Italian team to YouTube.

“I hope you find it as entertaining as it was unpleasant for me,” he said. “Why am I writing this comment? Because I feel I deserve some goddamn comment karma as well because that tasted like shit (coincidence?)”