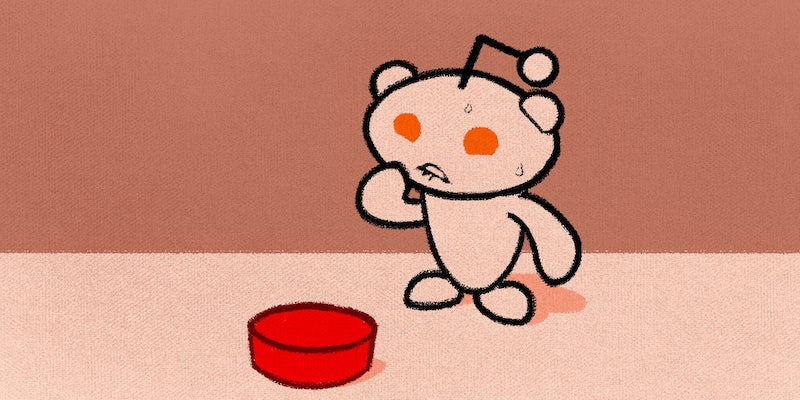 The only thing The Button is missing is food and sex.

Bonding over nothing is still bonding. This is something that people need to remember when they turn their noses up at the popularity of the Reddit Button. In the three weeks since it has appeared, it has been described as an evil April Fool’s joke, a social experiment, and a total waste of time. The second-most popular response to the Reddit Straw Poll “What color do you want to be?” is “zero f***s given.”

But despite the naysayers, The Button is a full-blown Internet phenomenon. People care very deeply about the button, as evidenced by the massive number of cliques, arguments, and factions that have sprung up around it. Even the detractors are participating in their own way, because let’s face it: Complaining about the pointlessness of The Button is part of the fun of The Button.

In case you need to catch up: On April Fools Day, Reddit published a page that shows a button next to a countdown timer. The timer counts down from 60 seconds but is reset any time any user clicks the button. You can only press the button if you are logged in, you can only press it once, and when you do, you are forever branded with a color that signifies how long you waited before pressing: purple for the impatient ones who clicked right away, moving through the spectrum to green, yellow, orange, and red for people who are able to press the button when the timer is getting closer to zero.

Of course, the longer you wait, the more likely it is that someone else will press the button first, and the counter will start over again at 60 seconds. Trying to achieve a “better color” can mean long and frustrating hours of sitting at the computer and waiting for that perfect moment to press.

It’s certainly not the first button prank to appear on the Internet. Almost exactly 10 years ago today, on May 2, 2005, New Grounds published a game called “The Big Red Button.” The game description: “This is the Big Red Button. There’s just one rule: Do not press.” Users are presented with a big red button—which, of course, they press. As the players repeatedly press the button, over and over again, they are treated to funny and whimsical commentary ranging from “This is why we can’t be friends” to “Ha! I have replaced the button with this penguin [the button has a penguin drawn on top of it], now what will you do?”

That 2005 game played off people’s natural instinct of curiosity: the desire to simply see what would happen next. The button on Reddit is much more complex and has spurred a number of thoughtful articles trying to examine exactly why people are so drawn to the phenomenon.

Scott Beggs wrote for Film School Rejects that the button is appealing because it allows users to create a dynamic narrative centered around mystery, much like the button on the television show Lost. The comparison to Lost became popular and was echoed a week later by John Pullen, writing for Time in his article “Why This Button Is the Most Fascinating Thing on the Web Right Now.” For both of these analysts, the primary psychological factor underlying the popularity of The Button is human curiosity and the desire to manufacture speculation and stories whenever we encounter the unknown.

Timothy Lee explored another angle in his article for Vox, suggesting that The Button is popular because it taps into two core forces in human psychology: status-seeking and boredom. Certainly, one of the most obvious effects of The Button is the fact that people organized into groups based on either the colors they had earned or on their attitudes toward pressing the button.

Groups even created names for themselves, such as “Knights of the Button” who want to coordinate group activity to keep the button running as long as possible, the “Order of the Red Guard” who aspire to achieve the coveted “red” status reserved for those who have pressed the button at the very last moment,or “Proud Non-Pressers” who refuse to be drawn into the game at all.

All of these analyses have an element of truth to them, but psychologically and sociologically speaking, there is a much bigger picture. The reason The Button is so popular can be described very simply: It is a video game. It is a full-on, massive multiplayer online game (MMOG). Reddit has released, for free to its members, an insanely fun MMOG, and the result is that it is strengthening the power and solidarity of its own user community.

The reason The Button is so popular can be described very simply: It is a video game.

Victor Manrique, a games designer and professor of The Master of Gamification at IEBS, has written a two-part analysis on why we play video games, and why they are fun. Examining the psychological research on joy and play, Manrique argues that games tend to combine elements that tap into the five core factors that contribute to feelings of happiness:

The more of these factors, sometimes called the “PERMA factors,” that a video game engages, the more “fun” people experience when playing them. Manrique then goes on to give examples from common and well-known video games, ranging from World of Warcraft to Candy Crush Saga, demonstrating how each taps into the PERMA factors. In a later article for Gamasutra, he also ties these factors into other psychological research, such as the “16 Basic Desires” theory of Dr. Steven Reiss.

Manrique also explains that although it may be impossible to strictly define what a video game is, we can at least describe what all games have in common: a goal that we will try to achieve, a set of rules, a voluntary and playful willingness, and continuous feedback on what we are doing. The Button on Reddit easily fulfills all of these elements.

Moreover, The Button also taps into a least four of the PERMA factors that make games fun. It allows people to have personal goals and a sense of accomplishment, by trying to achieve a particular color for yourself. It allows people to become a part of something larger than themselves, such as trying to coordinate activities to slow the clicks and make the button last as long as possible. It is a rich source of communication and collaboration, which strengthens personal relationships. And finally, the very act of sitting and staring at the timer, trying to strategically decide how long to wait and when to click, is challenging and engaging.

While on the surface this appears to be nothing more than an April Fools’ joke that spun out of control. But you should not underestimate the psychological power and importance of video games—even video games like The Button, which are not presented as “video games.”

The engagement that games provide puts people in a mental and emotional state that psychologist Mihaly Csikszentmihalyi calls “flow,” one that is associated with creativity and genius. In 1955, anthropologist, psychologist and philosopher Gregory Bateson wrote “A theory of play and fantasy,” published in Psychiatric Research Reports, in which he argued that “play” is one of the most complex mental phenomena that any animal can engage in, requiring complex communication, social coordination, counterfactual thinking, and mental simulation in order to hypothesize about how different courses of action may turn out.

In short, games are so appealing, at least in part, because they exercise literally every part of our minds.

Finally, the shared experience—the bond and feeling of community—that people are able to take away from participating in this game are emotionally and psychologically real. As is true with any kind of large multiplayer game, The Button has the ability to reduce social barriers and add intensity to existing relational bonds simply because mass participation in a challenging activity creates group cohesion.