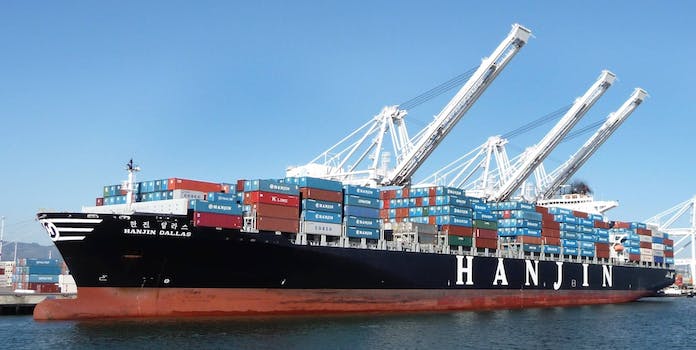 Artist’s residency ends with her stranded in middle of ocean

Artist Rebecca Moss is stuck on a container ship because the shipping company went bankrupt.

Art isn’t typically seen as a perilous career, but for Rebecca Moss, it meant getting stranded at sea.

On Aug. 23, British artist Rebecca Moss set sail on the freighter ship Hanjin Geneva, having accepted an artist’s residency called “23 Days at Sea.” The plan was to create video and performance art inspired by the journey from Vancouver to Shanghai. But on Aug. 31, the container ship company filed for bankruptcy.

Hanjin Shipping’s financial problems put its fleet of container ships in seafaring limbo. It can no longer pay the fees required for its ships to dock at ports around the world, and even if those ships can find a port that will let them in, they run the risk of having their contents seized by Hanjin’s creditors. This led to dozens of gigantic container ships milling around the ocean with nowhere to go, carrying an estimated $14 billion in cargo.

Rebecca Moss’s circumstances are hardly the most worrying aspect of this situation—some ships are running out of food, water and fuel—but she’s certainly in a unique position. It’s also surprisingly appropriate for the focus of Moss’s art, which the Vancouver Sun describes as an exploration of “the comedic situations created when mechanical systems and nature collide.”

Moss only has sporadic contact with the outside world right now, but she was able to give an interview to the Vancouver Sun. She says that Hanjin’s bankruptcy gave her a different outlook on her work during the residency:

“When I watch back all of the footage I have of the containers being loaded, for example, with the knowledge they are destined for nowhere in particular, it becomes comic, but also such a tragic waste of labour. Whereas before I was trying to tease out an absurdity, now it is hitting me in the face everywhere I look.”

The Hanjin Geneva’s original voyage was scheduled to end on Sept. 15, but now the ship’s captain is trying to find a new port to let them in. The crew and passengers have been told to conserve food and water, but emergency supplies can still be delivered by ship from the coast of Japan.