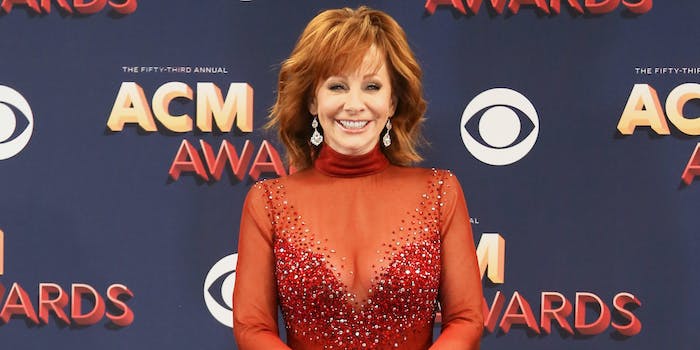 Reba McEntire made her own ‘Reba’ TikTok—and people love it

She posted the best one yet.

Imitation might usually be the sincerest form of flattery, but as Reba McEntire demonstrated on TikTok, the ultimate form of challenge flattery arrives when an artist whose song is behind a challenge joins in.

From 2001 to 2007, McEntire starred in the WB/CW sitcom Reba, which follows the lives of a single mom of three (McEntire) and her family in Houston, Texas after her husband leaves her for his colleague. Among Reba’s centerpieces—apart from McEntire playing a fictional character on a show that shares her name—is the show’s theme song, “I’m a Survivor.” In what was often typical for many sitcoms at the time, the title sequence featured random flashes of the cast alongside their names as the song played. Here’s what that looked like for Reba’s third season.

But on TikTok, “I’m a Survivor” is having a moment. TikTokers are latching onto the chorus of “I’m a Survivor” and depicting the various ways of how people continue to persevere in the face of the most minor of obstacles.

“But she’s just too hard-headed!” McEntire sings. “A single mom who works two jobs / Who loves her kids and never stops / With gentle hands and a heart of a fighter / I’m a survivor.”

So what does that look like when TikTok takes over? Perhaps it’s pushing through when there aren’t enough ketchup packets.

A dog’s struggle when they’re not fed on time? Entirely relatable.

And those are far from the only struggles that TikTokers are pushing through while set to the Reba theme.

But McEntire might’ve topped them all. She put her own spin on the Reba challenge and showed how she pushed through when her charges—a group of donkeys—do not seem to care that she walked over with heavy buckets full of food for them.

“Heard there might be a little trend going on over on @tiktok_us…” she tweeted.

And needless to say, people are impressed.

Could the Reba trend perhaps lead to a Reba resurgence? Fortunately for anyone who wants to revisit Reba or watch for the first time, all six seasons are readily available to stream on Hulu.