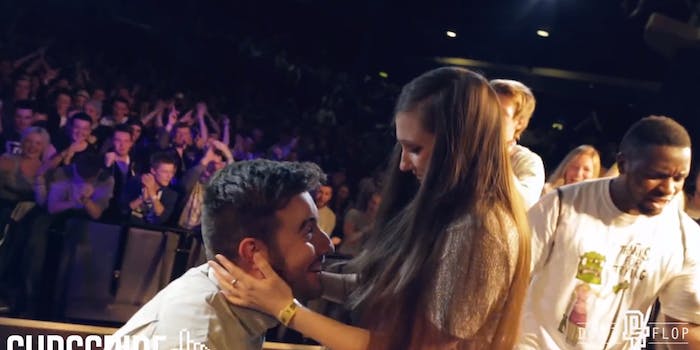 Whoever performed after this guy had a tough act to follow.

Whoever performed after this guy had a tough act to follow.

Adam Felman and Jackie Harper, who originally met while rapping, were teamed up for a two-on-two battle in Leeds, West Yorkshire, last weekend. While Harper ended her turn with an insult, Felman decided to do things differently.

And while rap battles aren’t exactly known for their romantic fodder, Felman took a chance and got a little emotional.

The audience of 1,000 was close to turning on him, but with one last verse and a wordless gesture, Felman won them over.

“So although I’m about to get lambasted on track repeat for attempting this in a battle, please, I’d kill for you Jackie, I love you, will you marry me?” he said.

It doesn’t even matter how the rest of the battle went. They already won.