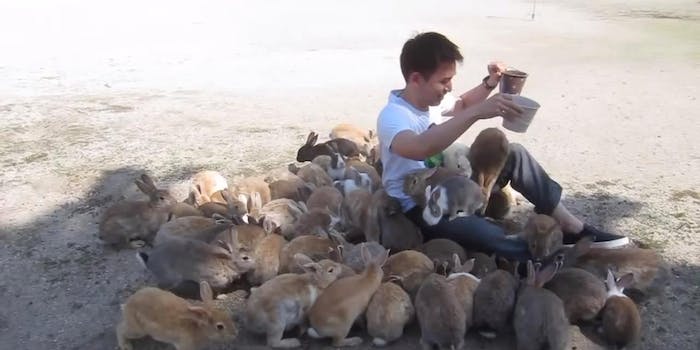 The site of a former poison-gas factory in Japan is now the home to a lot of fluffy bunnies.

People tend to throw the phrase around rather loosely, but if your idea of a great time is lying down in the sun while being smothered by a herd of cuddly rabbits, then this guy really is having the “best day ever.”

The video is from episode 1 of the YouTube channel My BB Bunny’s Bunny Island series, filmed on the Japanese island of Ōkunoshima—or Usagi Jima (“Rabbit Island”), as it’s affectionately known. During World War II, Japan used Ōkunoshima as a poison gas factory. Thankfully, today it couldn’t be less hostile.

The rabbits on the island are considerably tame and known to approach humans in droves, especially at feeding time:

And when they’re hungry, they’re even known to chase some people:

I know what you’re thinking: “Can I visit Bunny Island?” Yes you can! There’s also a poison gas museum on the island you can check out, and even a hotel you can stay in, albeit just the one.

While you’re at it, why don’t you stop by Japan’s Kitty Island too?

Or the Caribbean island run by pigs that swim all day?

Just be careful while you’re booking that vacation, lest you accidentally wind up on komodo dragon island instead.