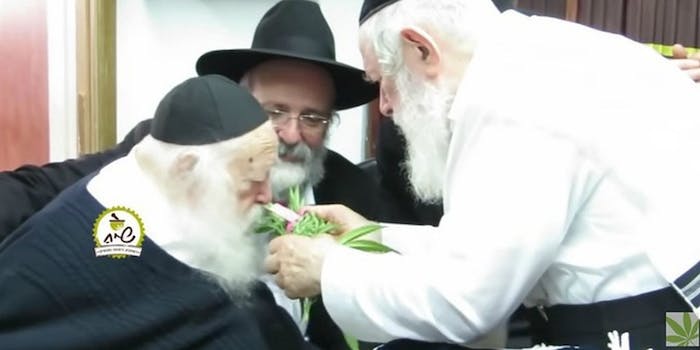 At last, one of the Four Questions has been answered.

For those people who can’t get through a Passover seder without smoking a little bit of weed, you’re in luck. According to this blessing by a leading orthodox rabbi, marijuana is now kosher for the Jewish holiday.

That’s from the mouth of Rabbi Chaim Kanievsky of Bnei Brak, who has proclaimed that everybody can smoke up (or cop some edibles) during the eight days of Passover, as reported by Haaretz.

Here he is giving the blessing over the plant.

In actuality, Kanievsky was chanting the blessing designated for a variety of spices, but it’s probably close enough.

Jews are not allowed to eat leavened bread during the Passover holiday, and there are other restrictions as well: Rye, oats, and legumes are disallowed (though interestingly, non-Orthodox Jews this year will be allowed to eat legumes for the first time since the 13th century), and while recreational marijuana use is still prohibited, using medical marijuana is now acceptable for those who keep Passover.

There’s no word yet on whether in order to enjoy the weed you must first dip it into the saltwater, as is customary at the Passover seder. But if that’s the requirement, there will be plenty of bitter herb to go around.