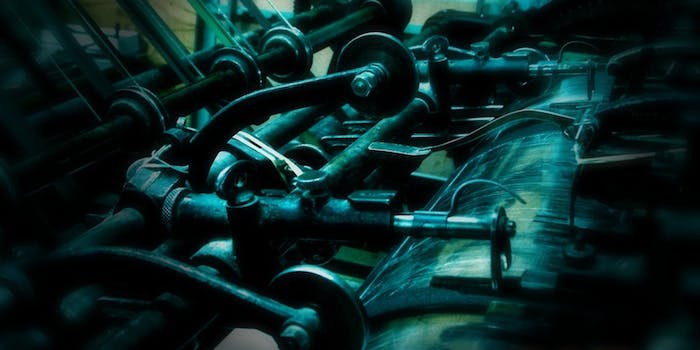 How publishing’s biggest troll kept harassing women for so long

Here's a look inside the literary scandal that shook Twitter.

There’s a strange, magical little corner of Twitter and the rest of the Internet you may not have heard of unless you’re an author or an enthusiastic reader: the world of book bloggers. It’s where people get together for Twitter parties, hold cover reveals on their favorite blogs, and connect with readers on Tumblr. It’s also where some of most vicious, bizarre, and chilling wars of the Internet take place, all beneath a facade of politeness because everyone is too terrified to say anything for fear of jeopardizing their position in the publishing industry or their role in the book blogger hierarchy.

Talk openly about the ugly side of the book blogging world, and publishers stop sending you ARCs (advance review copies), offering interviews, or providing exclusives and cover reveals, if you’re a book blogger. If you’re an author, it’s a great way to get known as “difficult,” to start raking in bad reviews on book blogging sites and networks like Goodreads, and to suddenly find yourself sinking in the cutthroat world of the publishing industry. As elsewhere, women in particular are put under the microscope and held to an often impossibly high standard of behavior. The undercurrent of sexism that runs throughout the Internet is present in the literary world as well, even if it’s rarely exposed to light.

That all changed this week with the latest round of horrific misogynistic abuse from long-time book blogger and apparently professional sexist Ed Champion, a man whom almost no one outside literary circles knew who’s catapulted himself into the public eye. If you hadn’t heard of Champion before, that’s no surprise, because unless you were one of the people he’d harassed on- and offline for years, he probably didn’t personally affect you.

This week, Champion launched a war against novelist Porochista Khakpour, a former friend turned apparent enemy as Champion claimed that he’d reveal a personal detail about her unless she apologized for a perceived slight. She refused, he revealed the information, and feminist Twitter exploded, eventually forcing the service to suspend his account. It wasn’t the first time he’d attracted attention from women in the literary world; his ugly screed against Emily Gould in June also turned heads.

However, Champion was hardly a newbie to the world of online harassment. Writing at Slate, Laura Miller tells a long and sordid tale of his abuses in the publishing world. She explains that he emerged among an up-and-coming crew of book bloggers in the mid-2000s, when book blogging was just starting to become popular, but unlike his contemporaries—notably, many of them, like the team behind Smart Bitches, Trashy Books, are women—his career never really took off.

According to Miller, Champion seemed to specialize in grudge matches with novelists on his podcast and blog, turning extremely vitriolic in recent years as he attacked not just authors, but book reviewers, agents, editors, and other bloggers.

When Champion got really riled up, he’d pull stunts like telephoning the employer, agent, editor or thesis advisor of those who had offended him, demanding that they be punished or fired. Novelist Ayelet Waldman once dared to joke that Champion’s preoccupation with insulting her must be motivated by lust for her husband, Michael Chabon. Champion repeatedly phoned her agent and publisher with threats of a libel suit until Chabon persuaded his wife that life would be easier if she sucked it up and apologized. She did.

Lest you think this was an isolated instance, Miller explains:

There are countless stories like these. They have been pattering into my inbox like raindrops since I put out the word that I was looking for instances in which Champion physically threatened his targets. It didn’t happen very often, but in every case I’ve been able to track down, the victim was a man. Many would prefer not to have their names dragged into another Champion mess, but former Salon film critic Matt Zoller Seitz has written that Champion ‘threatened to put out a cigar in my mouth after I confronted him over his silly preening.’ New York magazine writer Boris Kachka received a voice mail in which Champion threatened to punch him in the face for commenting on his blog. Later, Champion would characterize this message as ‘performance art.’ The writer and blogger Ron Hogan has tweeted that Champion ‘threatened to assault me at a book party.’

Champion had a chilling effect on the blogging community, as well as authors, who dreaded invitations to his podcast and feared savage reviews—and what would happen if they didn’t respond (Miller pointed out that Champion became peculiarly obsessed with her almost precisely because she refused to dignify his attacks with a response). Champion’s strange stranglehold on the literary community became the subject of fascination and whispered frustration among his targets, who freely shared horror stories amongst each other, but seemed powerless to stop him.

He kept receiving ARCs from publishers, authors kept agreeing to his interviews, and his fellow book bloggers tiptoed around him, even when he was behaving in sexist and borderline dangerous ways. Part of that may have stemmed from the deep-seated fear of engaging with people known to engage in harassment and threats, but it was also related to the sometimes incestuous world of publishing: For nine years, apparently up until the incident with Khakpour, Champion dated Sarah Weinman, an editor at industry trade site, Publishers Marketplace, where she works on the daily newsletter, Publishers Lunch.

After all, as J.K. Trotter points out at Gawker, “It seems worth noting that in close-knit, relationship-dependent industries like publishing, the line between ‘fear of pissing off a powerful journalist’ and ‘fear of upsetting a friend’ is often difficult to identify.”

In that climate, Champion’s victims were afraid to speak, which perpetuated the cycle of his own self-aggrandizement as he began to think of himself as a powerful, untouchable force within the industry. It perhaps explains why he was still tolerated in literary communities through years of abusive behavior, and even after his remarkable blowup in June that attracted attention far outside literary circles, coming as it did at the precise moment that many people were discussing literary sexism and gendered criticism.

Even as people were criticizing Champion, he was attempting to use emotional manipulation to avoid responsibility for his actions, threatening suicide in June and again in the wake of his most recent highly public act of abuse. Ironically, Khakpour and Champion had become friends in the first place because she’d risen to his defense in June, asking that critics moderate their calls for accountability in light of the fact that he was expressing severe emotional distress.

Such moves on the part of misogynistic characters online—like Hugo Schwyzer, for example, who was tolerated for years in feminist communities despite acts of violence in his past and inappropriate behavior with his students—underscore the fact that many believe they can escape criticism by appealing to basic humanity. No one wants to be accused of pushing someone to suicide, and rising awareness about mental health issues has made people more sensitive to concerns about depression and suicide, but at the same time, when vicious people hide behind mental illness as an excuse, it becomes functionally impossible to address harassment and reform communities to eradicate individuals like Champion.

The suddenly very public nature of the full extent of his harassment, threats, and abuse has led many bloggers to start speculating about how to address Champion. Miller suggests:

Say, on the other hand, Champion were to stop receiving review copies. Say authors and publicists were to refuse to talk to and deal with him. Say readers stopped bestowing on him the favor of their attention, which is still attention, the thing he seems to crave most, be it ever so angry and accusing. That would be a new and powerful form of silence. Champion could go on ranting and raving, as is his right, but when nobody is listening to you, you might as well not be talking at all.

Kate McDonough at Salon further argues, “I agree with novelist Ayelet Waldman that Ed Champion’s professional oxygen should be cut off. That the message from the publishing and literary worlds needs to be decisive: Your abuse is intolerable, and we do not work with abusers.” Yet, as McDonough points out, this is a problem bigger than Ed Champion. This story fits into the larger narrative of the abuse of women online, including within literary circles, and it must be viewed in that light. She says:

Women like Khakpour and others who have been targeted, threatened, intimidated or abused (including some men) are sharing their stories and experiences with one another, situating this behavior in a matrix of abuse and harassment that keeps women silent. … Having a community in place to step in and connect these dots can be the first step to figuring out what long-term accountability actually looks like, as messy a prospect as that might be.

Exposing violence can be a messy and unpleasant business, but sunlight, as they say, is the best disinfectant. The recent movement among women across online circles to publicly name and shame their harassers is sparking a larger conversation about how to protect women, how to make the Internet safer, and how to cut harassment out of Internet communities.

The solution to the issue may lie in sustained public pressure on harassers, combined with freezing them out. As Miller points out, what if known harassers held a party and nobody came?

Correction: A previous version of this story misidentified Sarah Weinman’s employer. She serves as a new editor for Publishers Marketplace. We regret the error.

Photo via Ryan McCullah/Flickr (CC BY 2.0)