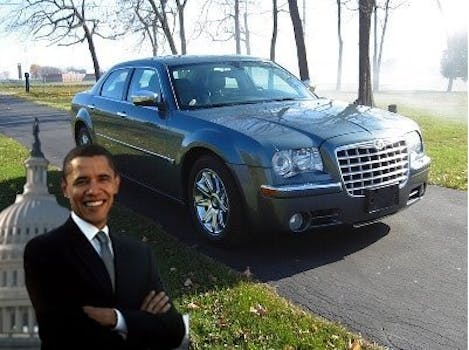 Ever wanted to drive a presidential vehicle? Now is your chance—but don't expect a stretch limo.

How much would you pay for President Obama’s old car? How about a million bucks?

Ebay is currently running an auction on a gray 2005 Chrysler 300C parked in Chicago, Il. The seller, cubfanatic23, an eBay member since 1998 who currently holds a 100% positive feedback rating, posted the sedan on Wednesday with a starting bid of $1,000,000, a price tag that has yet to receive any bids from the eBay community. It will stay up for auction on the site until February 2.

“We have the original paperwork and the title showing this vehicle was actually used by Barack,” cubfanatic23’s listing description states. “19,000 miles driven when this vehicle was Obama’s – I’m sure many of them were highway miles back & forth from Chicago to Springfield since Barack was an Illinois State Senator during this timeframe.”

The description goes on to state that the car was registered in Obama’s name on July 13, 2004 and that if readers think the asking price is too high that they should consider that “The President of Iran’s ancient Peugeot fetched £1.5million at auction” and “a light-blue 1975 Ford Escort GL once owned by Pope John Paul II sold for $690,000 to a Houston multimillionaire who put it in a museum.” (Aside: Pope Mobile >>> Ford Escort)

This morning the eBay listing got picked up by BBC television show Top Gear and posted onto its Facebook page, where a lively hybrid conversation about Obama, the auto industry, and the listing’s legitimacy ensued.

“So let me get this straight,” wrote Edwin Kreigel. “Before Barack was President of the United States, he was just a nobody politician cruising around in a 300C that cost between $30-40K. For the last 4 years he’s been running this country deeper into the toilet, and that makes his former car (that’s AT LEAST 4 years old) worth 25 times MORE than what it cost new?? Tell the current owner to share whatever he’s smoking.”

Adnan Cassim just wants to the current owner to take some of that truth serum: “I would prefer to purchase an ordinary Chrysler 300c than purchase this. To start with what is the guarantee that this car really belonged to president Barack Obama.”

More heated is poster Sue Anderson Rainer, who wrote “Seriously?! Obama was driving a V8 gas hog and then becomes president and tries to shove a Chevy Volt down every American’s throat? What a hypocrite! The only way I would buy it is if I could run him over with it afterward.”

Whoa, Sue Anderson, OK! Bad look going with the three names and threatening a President’s life. Someone drop a million on this whip so we can keep the President safe.