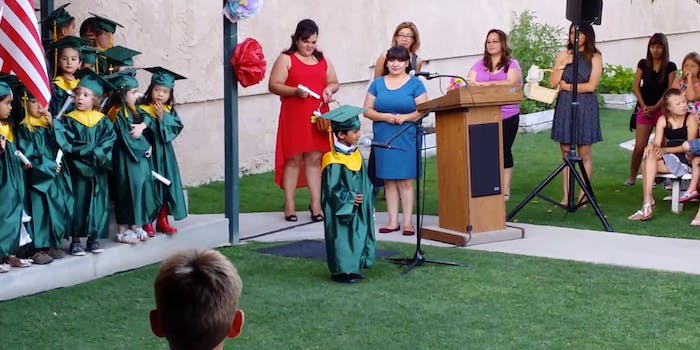 He's got some big shoes to fill.

Most of us have no idea what we want to do when we grow up—even when we’re already adults—so I kinda have to admire how certain this kid is of his future career aspects.

Jathan Muhar is dressed in his cap and gown for one of the biggest events of his short life: preschool graduation. After suspending the disbelief of preschoolers dressing up in caps and gowns in order to ceremonially make their way to kindergarten, he goes up once his name is called and confidently announces his goal in life.

It’s unclear from the short clip whether every student did this, but it’d be tough to follow this act.

Muhar is not alone in his dream job. There’s the kid to look up to who’s just a year or two older than him along with the seven actors who’ve held the job (and the one who just stepped into his suit). Impossible or not, he knows what he wants to do in life.

It certainly puts my pre-k aspirations to become a baker to shame.