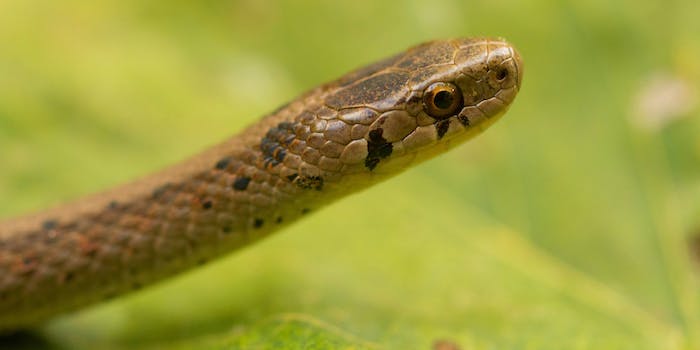 She decided not to keep it.

Eastern brown snakes are well known for both their speed and aggression, and are the world’s second-most venomous land snake—making it the second-to-last thing you want to find hiding under your refrigerator.

But that’s exactly what happened to a woman from Adelaide, Australia, when she went to the fridge to get a drink one day. She saw the snake’s tiny brown head peering up at her and called Snake Catchers Adelaide, a company that specializes in snake and wildlife removal.

That’s when Rolly Burrell came over and used a highly technical snake removal technique called “grabbing it with your bare hands and throwing it in a sack.”

It’s a good thing Burrell came over when he did. Although in the video they refer to the snake as “he,” it turns out that he was a she, and was carrying a belly full of eggs—14 to be exact—which she laid two days later.

“It’s lucky she saw the snake now or she might have been going to the fridge to get a drink later on and seen all these little critters all over the place,” Burrell said.

At which point, it’s safe to assume, she would have skipped the wildlife removal service and just called a real estate agent.

H/T Nothing To Do With Arbroath | Photo via John Robb/Flickr (CC BY SA 2.0)