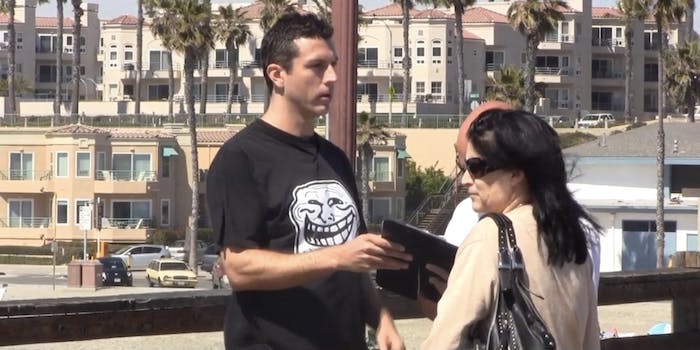 Maybe if you want to turn the world’s only remaining superpower into a horrifying surveillance police state, you just have to ask nicely.

Prankster (and Illuminati writer) Mark Dice went around a San Diego boardwalk asking people to sign a petition for an “Orwellian police state in America.” And they went for it.

Since former National Security Agency contractor Edward Snowden leaked a host of agency spy documents to the media, disapproval of government surveillance is reaching record highs in the U.S., including 74 percent who think the NSA intrudes on their privacy rights. Apparently, Dice found the other 26 percent.

It’s more of an indictment of people who sign petitions without paying attention than  evidence of actual support of a police state. Dice wore a Trollface T-shirt while vaguely tying government spying with the recently ended government shutdown, so his message should have been unbelievable to anyone paying attention.

You’d think a request for a signature for a “Nazi-style police state” would be enough to throw people off, but that’s not the case. On Twitter, he defended its integrity, saying that political sentiment is “probably worse in SoCal than in other parts of the country.”

“City council just does not know what they’re doing,” one woman says as she signs.

Them and you both, lady.