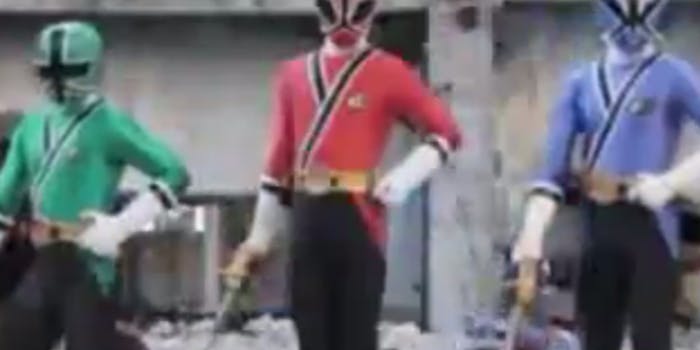 It’s getting harder and harder for women in India to stay up to date on what’s currently going on with the Power Rangers.

According to The Hollywood Reporter, Saban Capital Group, the private investment firm that owns the Power Rangers brand, has filed a takedown order with Kunal Kandpal, a woman living in Maharashta, India.

In the order, the Los Angeles-based group demanded that Kandpal remove three videos from her YouTube channel, all of which featured extended portions of two Power Rangers Super Samurai episodes.

One video is an 11-minute clip from the current season’s premiere episode. The other two combine to make up the entirety of last season’s finale. None of the three videos have been received more than 34 views.

Power Rangers Super Samurai is the current iteration of the popular child-friendly television franchise that’s now in its 19th season.

Kandpal, who could not be reached for comment, has allegedly refuted the notice, filing a counter-notice that stated the videos were her own “private property” and did not attract enough attention to warrant a takedown.

“u cn see hw many views i get on this video,” Kandpal wrote in her appeal, according to THR’s report. “people are requesting me to upload more of this video, so please get clear who the hell is jealous of my video and trying to remove it from youtube.”

YouTube temporarily removed the videos from its site, but all three have since been reuploaded to Kandpal’s channel. Neither YouTube nor a representative from Saban Capital Group returned the Daily Dot’s request for comment.

Those in India hoping to follow the trials and tribulations of this latest pack of Power Rangers without any interference or annoyance from Saban Capital Group and YouTube’s copyright guidelines can tune into NickIndia every night from 9pm to 10pm.