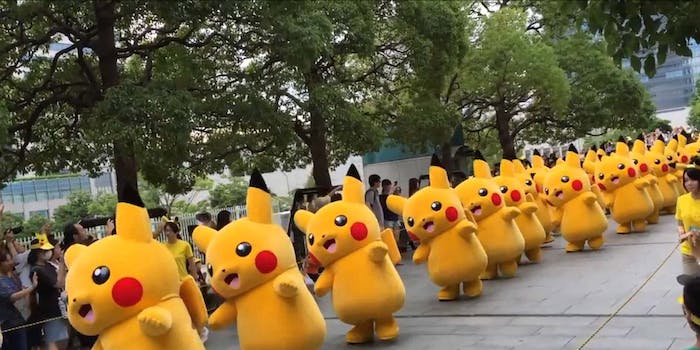 PC culture is not the problem. Bad comedians are.

Jerry Seinfeld is the latest comedian to insist that political correctness is ruining stand-up comedy. “There’s a creepy PC thing out there that bothers me,” Seinfeld said on a recent episode of Late Night with Seth Meyers, blasting critics of his joke about people scrolling their phones “like a gay French king.”

However, people like Seinfeld are actually the ones causing harm to the art form, because they’re trying to shut down criticism.

When I started doing stand-up comedy, I was very outspoken about this so-called “PC culture.” I would go on stage, say the most offensive things I could think of, and then get angry at the crowd for not laughing. “This is a comedy show,” I’d yell. “Get a sense of humor!” Not once did I think it was ever my responsibility to be funnier.

My philosophy at the time was simple: Say whatever you want, and people who get offended are always wrong. I’d go on tirades about social justice warriors (SJWs), a pejorative term to describe people who engage in arguments about social justice on the Internet, and I ranted about how people getting offended were ruining my right to say whatever I wish. I screamed and accused everybody else of being emotional while claiming that I was the only calm one in the room. (By the end of these discussions, my blood pressure was higher than anyone else’s.)

Years later, I realized that engaging in online arguments about the “holy sanctity of comedy” had me acting like an SJW myself, and my cause was gallows humor. I felt like the only real truth in life was the ability to tell offensive jokes without repercussions. But I never owned my emotions. I was the one shouting about how little I cared when it was obvious that I very much did.

Since I was so angry, I couldn’t take criticism, and this was very harmful to my comedy. Feedback and constructive criticism help comedians and the art form grow. With stand-up comedy, the comedian receives feedback right away. If an audience doesn’t laugh, it could be due to a number of factors: The venue wasn’t right for comedy, the comedian wasn’t a right fit for the room, the joke isn’t finished yet, the joke itself isn’t funny, or the audience simply didn’t find the comedian funny.

Ideally, this is when the editing process would take place, like figuring out a puzzle. “What went wrong with this joke? Why did this punchline not work? Did I deliver it correctly? Maybe this crowd didn’t like it, but I should try it somewhere else?”

The worst reaction a comedian can have is lashing out at an audience for not laughing. Even though it can be frustrating and hurtful when an audience doesn’t laugh, it’s not their job to laugh at your jokes—it’s your job to make them laugh. Whenever I see comedians lashing out at an audience, I’m reminded of how ego driven and angry my comedy used to be. I automatically assumed they didn’t laugh because they were “oversensitive” and “too PC.”

Shouting into a microphone with the sole intent of being carelessly “edgy” is not art. It’s stroking your own ego to feel powerful, and some audiences have had enough.

I know lots of comedy fans who are just yearning for something new and different, and they’re tired of hearing the same old clichés and stereotypes. There’s only so many times you can hear jokes about black people stealing, how Asians can’t drive, and heteronormative dating jokes where “women do this, but men do that” before it gets exhausting, boring, and unfunny. These comedy fans are generally progressive-leaning, and they’re oftentimes unfairly accused of being humorless.

Many progressives love Inside Amy Schumer, a show that is not “PC” at all, and more liberal-leaning websites are constantly posting articles about what a genius Louis CK is. A few of these liberal comedy fans may take some jokes too personally, but to brush this entire group as humorless and PC is dishonest and lazy.

Just because some comedy fans want something new doesn’t mean that other pre-existing kinds of comedy are going to disappear. There is room for everyone. There are spaces for politically incorrect comedy, clean comedy, liberal comedy, conservative comedy (although let’s be honest, Bill O’Reilly probably isn’t the greatest stand-up in the world), club comedy, and alternative comedy.

Having a diverse variety of comedy styles and hearing different perspectives means that the spectrum of comedy is continuously getting broader, and this opens opportunities to explore even more topics that haven’t yet been talked about. Many of these new spaces opened up due to criticisms of old comedy tropes, and there was a demand for something different. Comedy is better than it’s ever been because so many people have voices now.

This fear that there is no more room for politically incorrect comedy is just untrue. This year’s Comedy Central roast of Justin Bieber had several comedians tell jokes about Bill Cosby, Ferguson, and 9/11. Louis CK released Live at the Comedy Store where he uses the “N-word” on several occasions. Chris Rock did a monologue on Saturday Night Live about the World Trade Center and the Boston Marathon bombing (on network television, of all places). Amy Schumer produced a sketch on her show about a football team that couldn’t grasp the concept of “no raping.”

None of these topics are “politically correct,” yet the comedians that produced this provocative material still have careers. These jokes are still being aired on NBC and Comedy Central. If anything, the outrage-driven publicity actually helps comedians gain more visibility.

The main problem with people who complain about political correctness is that they’re thinking lazily. I’ve voiced my disdain for hacky stereotypical jokes about trans people (and I have a vested interest in this since I am transgender), and some people have angrily asked me, “Oh, are you not allowed to make fun of transgender people anymore?”

I never said that. I’m just curious about how hard the comedian worked on the joke. 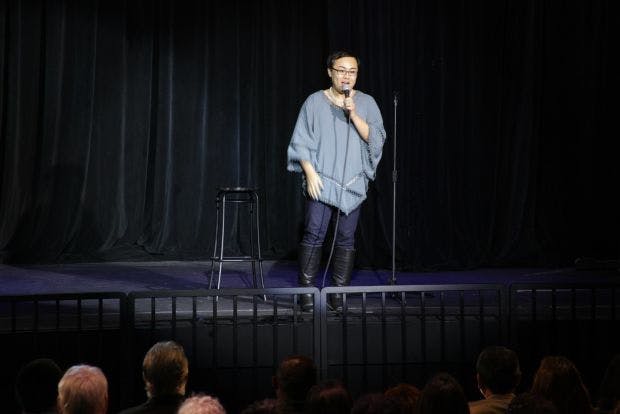 A much happier Robin Tran performing stand-up comedy as openly trans. I have heard a ton of jokes at my expense.

Last year, I heard Dave Chappelle tell three different iterations of the same joke about transgender people, and it evolved every time. The first iteration was that he refused to gender trans people correctly because he didn’t feel like he had to participate in somebody else’s self-identification. The second iteration was Chappelle reluctantly agreeing to gender trans people correctly because he wanted to be more accepting, but he was still confused about trans people’s body parts. In the third iteration, Chappelle completely scraps the entire first part of the original joke, genders all trans people in his story correctly, learns more about the LGBT community, and jokes about almost getting into a fight with a trans woman at a club.

Shouting into a microphone with the sole intent of being carelessly “edgy” is not art.

The final iteration was by far the funniest and had with the most receptive audience reaction. The joke was a hit because it was the most complete and well-thought-out version of the joke, and it still pushed boundaries. It wasn’t PC. He listened to the feedback and kept working on the joke. But Dave Chappelle did not get upset at people for either disliking the joke or getting offended.

In fact, here’s what he had to say on Inside the Actor’s Studio regarding a woman who was offended by a sketch from Chappelle’s Show:

There was a lady from Texas who called Comedy Central damn near 100 times. She was furious with me. I wasn’t mad at her for being mad at me. I was like, “Okay, that’s good.” It’s not good that she’s mad at me, but she’s entitled to her opinion. And maybe she’s right, I don’t know, I just thought it was funny and that’s why I did it. … People I love tell me I go too far sometimes. Maybe I went too far, but I did it. And plus, the only way you know where the line is is to cross it, and I think about what it’s like if nobody is crossing the line? You just wanna be on the right side of history, and sometimes what’s going on in the immediate present is not as important as the long-term. The truth is permanent, and everything else falls by the wayside.

If I’m making stand-up comedy sounds like too much work, that’s because quality art takes dedicated effort. Otherwise, comedy would just be egomaniacs screaming into microphones hitting any and every target without regard to anybody else’s feelings—and then getting upset the second someone hits them back.

That hardly seems fair, because stand-up comedians shouldn’t be immune to criticism. And they aren’t above treating stand-up comedy as an art form that deserves respect.

Robin Tran is a standup comedian, writer, and spent most of her life living as Robert Tran. Robin graduated from UCI with an English degree after her friends and family told her to quit being a theater major because they felt that her dreams were unrealistic. In 2012, Robin began her standup comedy career (as Robert Tran) and has won several standup comedy competitions including the Westside Bar & Grill Contest in 2012 and Uncle Clyde’s Comedy Contest at Flappers in Burbank.