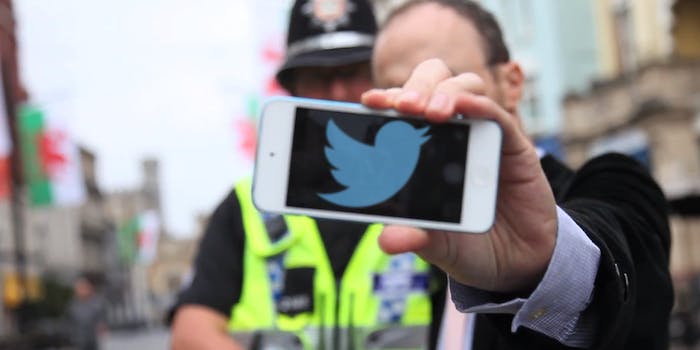 Why do police forces invest so heavily in social media? Even they’re not sure.

First, police started sending cops to Twitter school. Then they began forcing high-ranking officers to post casual daily updates about their communities. Then came the online backlash after the NYPD’s Thank a Police Officer Day.

At a recent NATO summit in Wales, this fad rose to a degree in which policemen had to pretend to be more than polite and social-media-enabled to a virtually empty city. No one cared. It’s easy to pretend you’re down with the selfies until there’s a riot.

These official accounts are often deserted a few hours before the event shuts down, forever lingering on the cache. The last (Welsh) signs of action on the @NATOWalesPolice account were on Sept. 8:

They retweeted a few local enthusiasts before officially dying down. Eerie:

1.4 million people in the U.K. may follow police Twitter accounts, but it’s not all fun and games: Last week, the award-winning tweetstar Inspector Michael Brown had his account suspended after “allegations of inappropriate use of direct messaging and social media.”

Across the pond, the NYPD of course has its own fair share of this type of procrasturbation:

Then, inevitably, this happened.

It’s silly. It’s chaotic. Police do not need social media presences. It’s a level of engagement and branding that is completely unnecessary. Twitter might even benefit from losing those wildly inaccurate police scanner accounts.