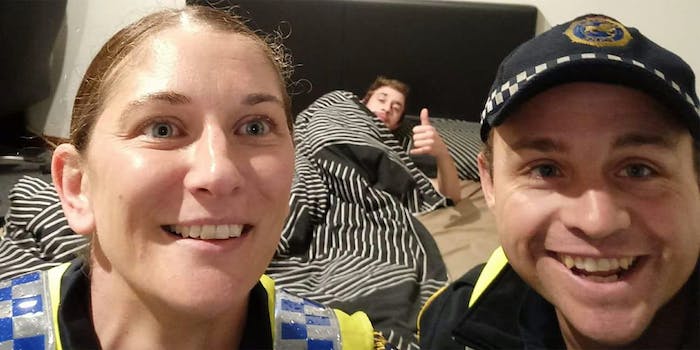 Most drunken encounters with police are downright regrettable, but occasionally we come across one that is more epic than embarrassing.

This weekend, Reece Park from Tasmania, Australia, woke up to find several “banger selfies” of himself from his bedroom, with two police officers at the camera, smiling in front of him. Park posted one of the images to Facebook immediately after, according to News.com.au.

“So was just looking through my phone and turns out these good cunts took some banger selfies after they took my drunk ass home! Bloody legends,” Park captioned the photo.

According to Tasmania Police, the two officers snapped the now-viral photo after being called by a taxi service—Park’s friends had put him in the back of a cab, but he was “a bit worse for wear,” unresponsive and unable to get himself home.

Though police don’t typically take people home, this pair decided to spare the cabbie and somehow figured out Park’s address. They took him home, got him into bed, and waited for a friend of Park’s to return home before taking off—but not before snapping a selfie to remind Park just exactly how he got home in the first place.

The photo subsequently went viral on Reddit‘s r/Australia page, as well as through the Tasmanian Police’s own Facebook post.

After a blackout night, my mate woke up to a ripper selfie on his phone! from australia

Tasmania Police encourages party-goers to plan ahead so they can enjoy their night. Senior Sgt Craig Fox, of Northern…

In their post sharing Park’s drunken pic, police urged partygoers to plan their nights before getting wasted. As for Park, at least he now has a ridiculous story to tell while on his next night out.