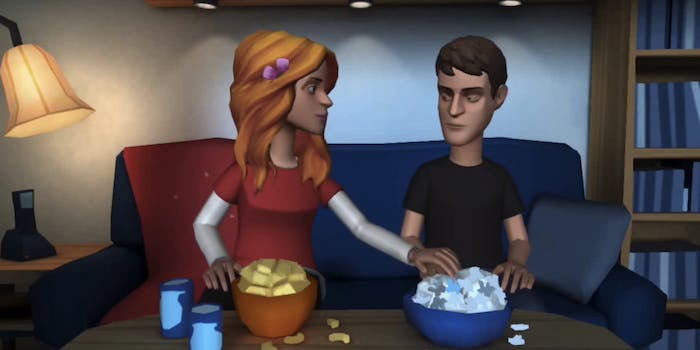 The surreal scenes of Plotagon, a text-to-speech animation platform

We have so many questions.

Somewhere along the way, the Internet’s collective lizard-brain discovered that the text-to-speech functionality built into every computer can be a source of incredibly delirious laughter. Type anything into that distant, uncanny-valley module, and bear witness to something almost technophobically sinister.

A couple months ago, I wrote about how the bulbous primary-color shapes of early 3D modeling have taken on a weirdly repulsive sheen to modern eyes. Those videos are often paired with text-to-speech dialogue, because if you’re going to desecrate Jimmy Neutron you might as well make him sound like a sociopathic computer. It’s good stuff! I mean, it’s terrifying and oddly disgusting, but it’s good stuff.

Thankfully, we now also have Plotagon, an app that lets you animate and share tiny little template-based 3D cartoons with your phone. You can record dialogue using your god-given voice, or, of course, text-to-speech. The results—something like moving versions of those once-popular BitStrips—are already confounding.

Like, here’s a PSA about alcohol consumption. Given without any tangible humor. By an android doctor. Or how about this very strange comedy(?) sketch that involves some plumbers and a confused-looking lady. It has a Wilhelm Scream. I don’t know, man.

Here’s a cartoon where two people talk about how their brains are in other parts of their body—that is to say, not in their heads. It includes the line “my brain is lost somewhere in transition,” which is an accurate description of how I felt watching it.

Meanwhile, we have this woman issuing some sort of nonsensical challenge about Thanksgiving in the form of a standup comedy set. And it seems that Miley Cyrus had some trouble with her baggage when flying into Los Angeles for her fateful turn hosting the VMAs.

If that’s not odd enough for you, check out this dude sitting in what I can only guess is the Sanctum Sanctorum, mewing into his microphone and talking about his issues with OCD.

Other videos address age-old questions, such as: “What if Mr Hernandez was a Chinese pop star?” and “What if there were a guy who could only say things sarcastically?” and “Why isn’t there a TV series called ‘The Scooby Poo Mysteries’?”

Plotagon is not, at the moment, a particularly famous app. I doubt you knew what it was before you read this thing and watched those videos. But it clearly has to have some sort of community. All these weirdos making bizarre, vaguely stressful cartoons must have something in common.

The world may never know, but I’ll be keeping a close eye.