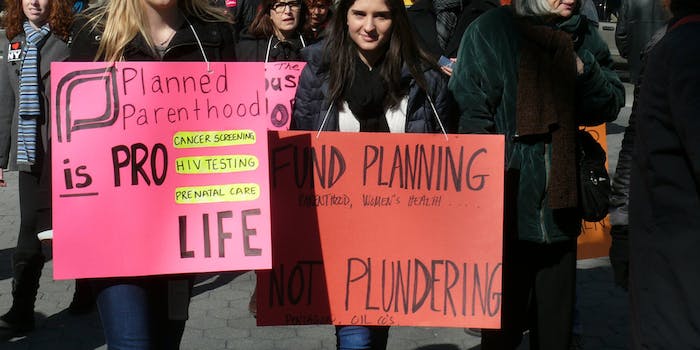 What happens when you try to “expose” Planned Parenthood on Twitter

You know those dastardly healthcare providers have something to hide.

Planned Parenthood. You know those dastardly healthcare providers have something to hide. Luckily, pro-life Twitter users are here to uncover their dirty secrets.

Using the #ExposePP hashtag, Planned Parenthood’s detractors began by tweeting in favor of a pair of videos posted by anti-abortion group Live Action. In the videos, an actress goes undercover to a Planned Parenthood clinic in search of an abortion, supposedly revealing Planned Parenthood’s habit of “targeting girls for extermination” through sex-selective abortions. Both videos, it later turned out, are heavily edited.

However, pro-choice activists quickly found the hashtag and began to take it over, “exposing” their own experiences with Planned Parenthood.

Somebody tried to come into the PP clinic where I work and shoot all of us.Pro life?Thanks for this hijack and your support. #exposepp

Answered all questions about birth control honestly and carefully when I was 15, and were the first ones to tell me abt date rape. #exposePP

When I had no health insurance PlannedParenthood kept me out of the ER for kidney infections and UTIs. And provided yearly exams. #exposepp

My former employer covered Viagra but not my birth control pills. #exposepp

After years of standing up to budget cuts and bomb threats, Planned Parenthood has some very loyal supporters. The #ExposePP hashtag is now full of stories from people whose lives were changed by Planned Parenthood’s services, as well as some tweets satirising Live Action’s pro-life arguments.

Planned Parenthood lets women make their own health choices without consulting their husbands or fathers, whose property they are.#exposePP

While four Americans were being killed in Benghazi, Planned Parenthood sat and did nothing to save them.#exposePP

And a few that expose Planned Parenthood’s real faults as an organization: