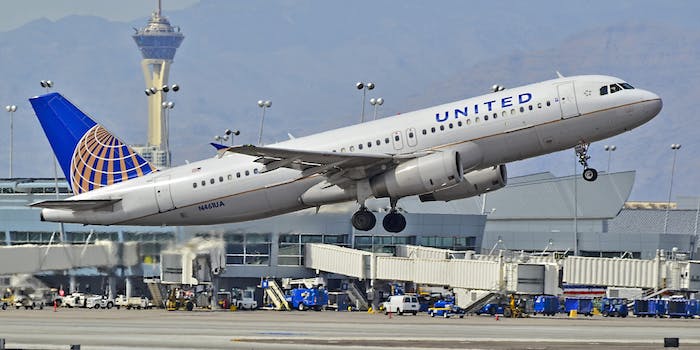 The huge nor’easter storm that pummeled the eastern part of the U.S. on Friday blasted people with massive amounts of rain and snow, left millions without power, and forced Donald Trump to ditch his wife. And if you were in a plane, you might have been reaching for a vomit bag.

That was the unfortunate situation for nearly everybody on a United flight from Charlottesville, Virginia to Washington’s Dulles Airport on Friday morning. As the plane approached the runway for its landing, the turbulence was so bad that the pilot sent the communications tower this message.

Pilot report from the Washington DC area this morning:
"IAD UUA /OV KIAD/TM 1238/FL040/TP CRJ2/TB MOD-SEV/RM VERY BUMPY ON DESCENT. PRETTY MUCH EVERY ONE ON THE PLANE THREW UP. PILOTS WERE ON THE VERGE OF THROWING UP. AWC-WEB"

In case you missed that, it said, “PRETTY MUCH EVERY ONE ON THE PLANE THREW UP” and “PILOTS WERE ON THE VERGE OF THROWING UP.”

When the damn pilots are on the verge of yakking up their breakfast, you have to know it’s a pretty shitty ride.

United said in a statement, via NBC Washington, that “a few customers onboard … became ill” but that nobody required medical attention. Passengers on other flights didn’t mind sharing their experience.

As a flight from Orlando approached the runway amid strong winds, the pilot aborted the landing and tried a different runway.

“I felt like I was going to throw up all over the place,” passenger Casey Kirk told NBC News. “Somebody in the back threw up. Lots of people were throwing up in bags. It was pretty crazy.”

Passenger John Kirk said it felt like the plane was moving sideways.

“I’ve never experienced anything like that,” he said. “The guy in front of me, whose seat I was holding, was throwing up for like five minutes.”

According to the Washington Post, thousands of flights were canceled from the three major New York-area airports. Sounds like those passengers, though, might have been some of the luckiest ones of all.