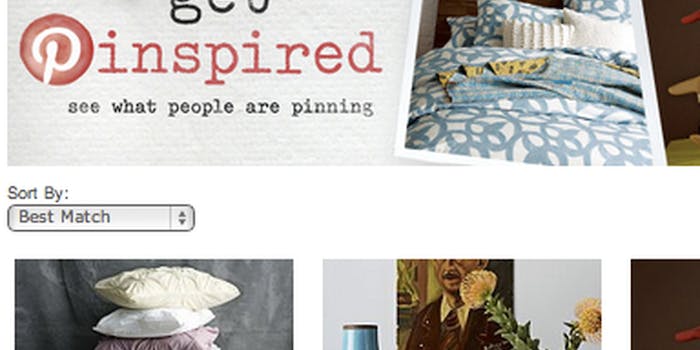 Pinterest finally gets “most pinned” lists, thanks to retailers

No API? No problem! Retailers like CB2 and West Elm are rolling "most-pinned" lists of their own.

This holiday season, why not crowdsource your Christmas list? Thanks to a new trend in retail, you can buy your loved ones the hottest gifts according to Pinterest users.

Pinterest is still in the process of preparing a public API—an interface that will allow third-party developers to easily create tools that work with Pinterest. The Twitter and Facebook APIs have given us analytics services like Topsy, but anyone hoping to create something similar on Pinterest is currently out of luck. Developers have been waiting for Pinterest to develop an API since February.

It could be that Pinterest itself isn’t done figuring out how to determine the site’s top pins—it doesn’t list them, either. Pinterest does offer a vague “Popular” page, but it is unclear how popular pins are chosen. While the page refreshes by the minute, pins at the top are more likely to have been added to the site months ago than today.

When we visited Pinterest headquarters in September, a spokesperson told the Daily Dot an API is in the works, but could not clarify further. Until then, it’s up to third parties to be responsible for their own analytics. And based on Pinterest’s own observations, companies are stepping up to the task by creating accessible lists of their most repinned pins.

You may not be able to find out which home goods are the most popular on all of Pinterest, but you can use West Elm’s “Most-pinned Products” to see which of the retailer’s home goods are getting pinners excited. Likewise, furniture store CB2 allows you to browse by popular pins.

It’s not just physical goods, either. If you’re trying to get an idea of the most popular projects on Pinterest, try Real Simple’s list of most-pinned DIY and organizing tips. If you’d like to let the masses choose your holiday dinner, try Cooking Light’s Most Pinned Recipes.

Pinterest may not be any closer to releasing an API, but companies are slowly filling the gap.