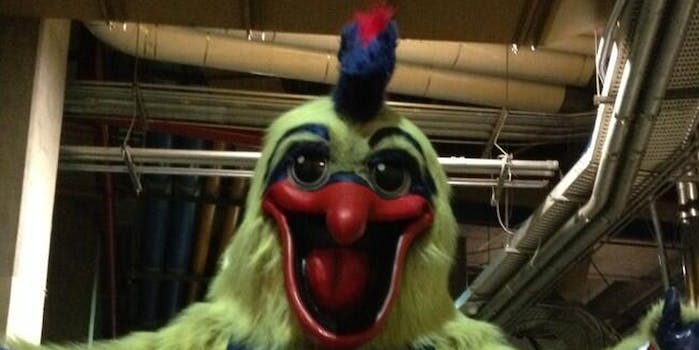 The New Orleans Pelicans’ mascot is terrifying everyone

The Pacers won, but no one was really watching—they couldn’t tear their eyes away from Pierre.

Wednesday night, the New Orleans Pelicans hosted the Indiana Pacers. The Pacers won, but no one was really watching—they couldn’t tear their eyes away from the Pelicans’ new mascot, Pierre.

And while many fans applauded the new mascot’s look, the main theme on Twitter last night was pure terror.

Pierre the Pelican was definitely in one of the cells from Cabin in the Woods.

Pierre the Pelican just became a person of interest in every murder in New Orleans this year and for the foreseeable future.

Anyone in favor of @Twitter automatically showing photos in the timeline hasn’t seen the nightmare fuel that is the @PelicansNBA mascot.

I think it’s all in the eyes. Pierre the Pelican’s eyes are soulless and terrifying. And WHY IS HE GREEN? OIL SPILL? @PelicansNBA

Pierre the Pelican up close before he attacks me in my sleep. pic.twitter.com/weyI0BTnpJ

A lot of people thought Pierre looked not like a pelican, but something “other.”

Pierre the Pelican reminds me a lot of Lady Elaine Fairchilde, the creepy puppet from “Mr. Rogers’ Neighborhood.” pic.twitter.com/ZUaTq1Ze1u

Back to Pierre the Pelican. Has anyone in the @nbapelicans org ever seen a real pelican? Even a pic? Pierre is just a Nightmare Chicken

And then, of course, Pierre was Photoshopped into other terrifying moments.

it’s not from this planet. pic.twitter.com/T1AAJ0FkkU

New Orleans has a rich history of costumery, which might be why Pierre’s getup is a bit of a letdown. Now you’re going to see those eyes in every sewer grate you pass. Happy Halloween!