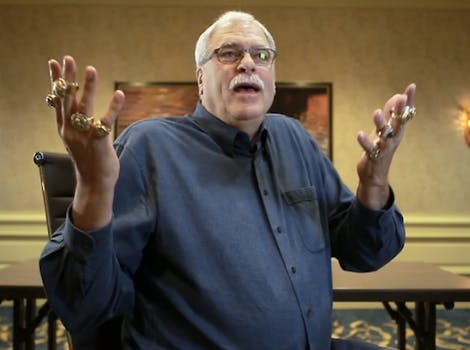 You try typing with 11 rings on.

Rejoice not with schadenfreude: Phil Jackson’s first tweet, mangled so badly that it appeared to be the keyboard-mashing of a stroke victim, was not some embarrassing accident.

The legendary NBA coach’s first-ever tweet was part of a promotion—for AOL, no less—and Twitter fell for it.

On Wednesday, Jackson tweeted his first tweet, “11 champ;ipnsikp[ ringhs,” a nod to his status as the winningest coach in American sports history. It was also English mangled so badly, Google Translate thought it was Filipino (translation: “11 field; ipnsikp [ringhs”).

Twitterers responded gleefully that the revered coach was mortal on social media, convinced he was “drunk & pissed off,” “butt-tweeting,” “drinking while tweeting,” had “a complete fail or a massive stroke,” or had been “swig[ing] St Pauli.” It was retweeted more than 26,000 times.

But it was not to be. AOL released a video Thursday showing Jackson “struggling” to compose the tweet. The joke, you see, is that it’s hard to type with a ring on each finger. It’s unclear where the eleventh goes.