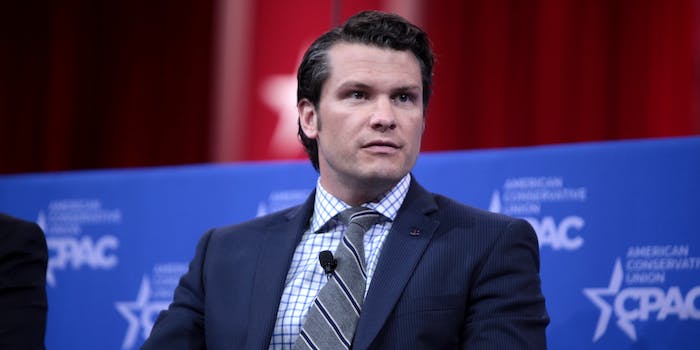 It completely missed the mark.

A tease for an upcoming Fox News segments nearly turned deadly after Fox and Friends host Pete Hegseth accidentally tossed an axe at a drummer.

Hegseth was teasing a segment on timbersports on June 14 with West Point’s Hellcats marching band playing in the background, in honor of both Flag Day and the Army’s birthday. Hegseth tossed an axe at the bullseye and it went over the intended target and hit someone off-camera. In the clip, he is seen visibly cringing.

But what Fox didn’t show was what (or who) the axe hit. That would be Hellcats drummer Jeff Prosperie, who played with his bandmates outside of the caged area where Hegseth filmed his segment. Later, he uploaded video of the axe hitting him, which was filmed on someone else’s phone.

Prosperie wasn’t injured as a result of the axe hitting him, but it was nevertheless still a frightening experience. He’s focusing on the bright side—he’s alive and has all of his limbs—as he elaborated on what happened that day.

“My leadership told me they were told there would be no axe throwing. I think the anchor person went rogue and decided to throw it. He had only thrown it once before in practice for an upcoming segment and they told him to throw it with more force. The vid you see is edited showing the Televised portion of the throw and then edited to a portion that was taken on someone’s phone of us being videoed. The part that was actually televised showed the overthrown axe and then segued to us for the drum solo bump, only showing me walking behind the section holding my arm. The actual part where the axe hit me was not televised. Poor decision, obvious negligence, should not have happened, could have been avoided. When shooting or throwing, always know what is behind your target. Basic safety rule.”