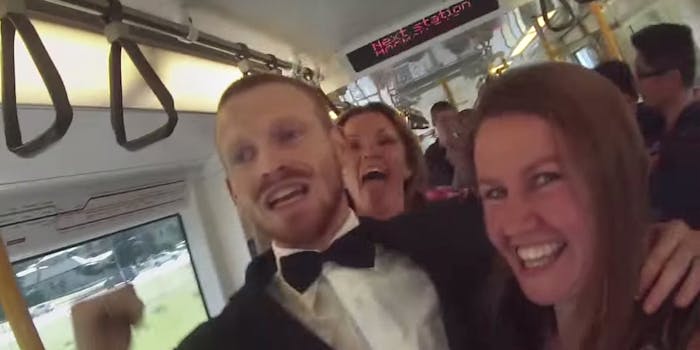 Can you ever not dance to James Brown?

“I don’t want money, I just want to spread a little bit of happiness,” said the tuxedoed Australian man boarding a Perth train.

The man—peace activist and blogger Peter Sharp—proceeds to ramble about individualism and communication. Then he puts on a speaker, cranks up James Brown’s evergreen “I Got You (I Feel Good),” and dances vulnerably, with daringly uncoordinated limbs.

“I’m doing this because we are all amazing individuals and we all have a story to tell,” Sharp said. “We all have something to share so as a way of breaking that ice, I’m going to start a small dance party.”

There’s hesitant clapping at first, then a few folks jump in. Within a few stops, “Come Alive” by Krafty Kuts has suffiently created a dance party—as evidenced by the instant hip-shaking from boarding passengers.

“If anyone wants to start, like, grooving you can totally do that,” Sharp said.

Sharp did admit to the Telegraph Monday that his production required staging: “I admit, yes it required around eight friends to already know what was coming but once that ice was broken, the rest of the public were more than happy to get involved. This highlights some interesting questions about the social norm which we collectively choose to live inside of.”

Clealry Sharp’s experiment panned out—with everyone from the elderly to stroller-pushing dads unable to resist the party. The next time I’m on public transportation I’ll secretly be hoping that a dapper white dude has a boom box and greets me with, “Welcome to the train party.”