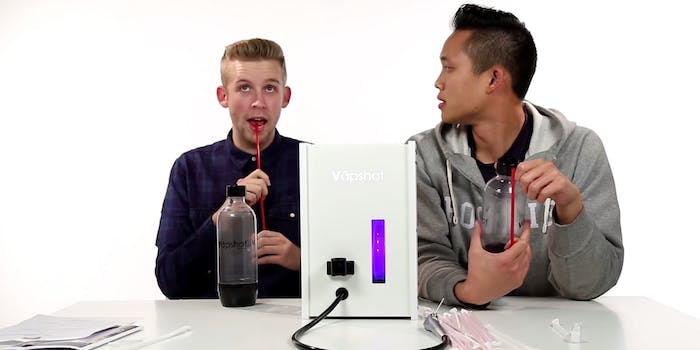 Watch people desperately try to get drunk off vaporized alcohol

The human body has yet to master the art of the "vape-stand."

BuzzFeed is back with another crop of overeager guinea pigs trying out what may be the “future of drinking”: vaporized alcohol.

According to the YouTube video, vaporized alcohol “goes directly to the bloodstream, making you intoxicated quicker,” though the buzz only lasts 15 minutes. As many of the users point out, you’re basically trying to get drunk off air.

As they try out the “Vapshot Mini,” the vape lushes fumble their way through the product’s way-too-involved operation for a rather lackluster payoff.

Yeah, it looks like “the future of drinking” is going to have to wait. It would look weird—and would definitely be costly—to have one of these devices at each end of a beer pong table.

And the human body has yet to master the art of a “vape-stand.”