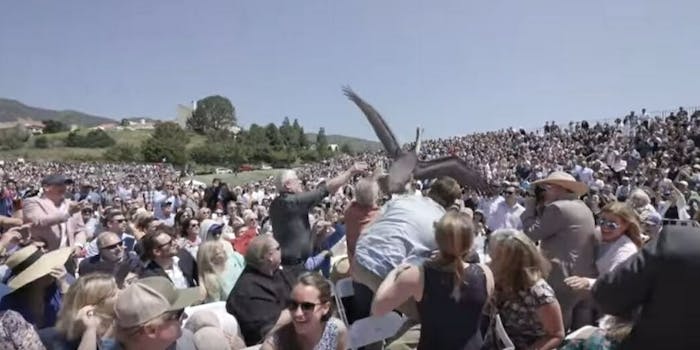 Pelicans invaded college graduation—and nobody knew what to do

Some in the crowd screamed in surprise.

Pelicans invaded the graduation ceremony at Pepperdine University this weekend, and somebody caught the entire wild incident on video.

As some in the audience scream in surprise, the bird first looks for a landing spot in the crowd before flying to the less crowded part of the platform and trying to bite the hand of the poor dude who’s been tasked with trying to remove it.

Then, the ceremony continues as the bird looks on in interest. It’s quite a scene (and a really nice job by the person who’s holding the camera).

Eventually, the pelican is removed from the immediate area. Hopefully, it flew back to the nearby Pacific Ocean where it will live out the rest of its life with a beak full of fish and, perhaps one day, an honorary college degree.