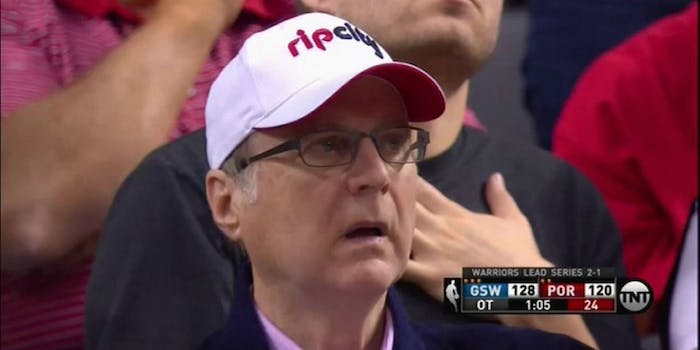 Steph Curry will one day make memes of us all.

Before the fourth game of the Warriors-Trail Blazers NBA playoff series on Monday night, there were real questions about whether Golden State superstar guard Steph Curry would be ready to play. He had sprained his knee two weeks ago, and he’d missed the last four games.

But Curry returned Monday, and he was eager to resume destroying and demoralizing any team that tries to guard him. He played so damn well, in fact, that he outscored the Portland 17-14 by himself in overtime—one of the greatest overtime performances by anybody, anywhere—and in doing so, he helped turn a stunned Trail Blazers owner Paul Allen into a meme.

First, here’s are some ridiculous Curry moves that gave the Warriors an eight-point lead with 65 seconds to play, effectively ending the game.

That series of events stunned Allen, a Microsoft co-founder whose face suddenly was transformed into a mixture of awe, wonder, and perhaps a whiff of disgust.

The video is even better.

And that’s when the memes began.

And when he transforms into Michael Stipe.

From there, the memes kept sprouting.

Ironic that the internet is turning on someone who essentially created it because they made a silly face. Oh well. pic.twitter.com/WZua7ZD9tn

As CBSSports.com wrote, “How do you make the 45th richest man in the world look this dumbfounded? This man has a 414-foot yacht that comes with TWO helicopters, a submarine, a remotely operated underwater vehicle, a basketball court, and a swimming pool if you’re not into swimming in the ocean but still want to be in the ocean.”

And yet Curry made him look like Rufus Cornpone. Unfortunately for Allen, that wasn’t the worst of it. No, the worst of it was that a man worth $17.7 billion became the latest version of the Crying Jordan.