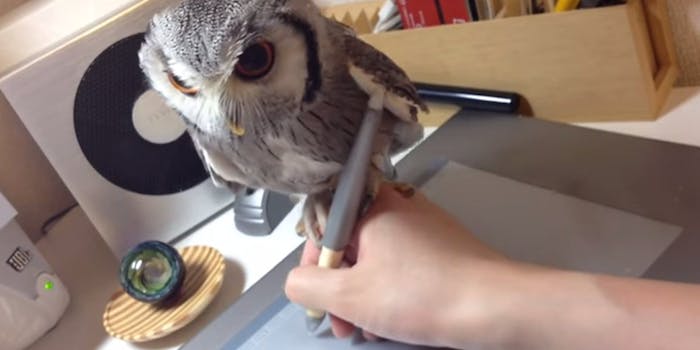 Adorable pet owl finds the best perch in the house

We here at the Daily Dot can’t claim any type of intrinsic understanding into the ways that owls may act when they’re domesticated and made into pets, but we’re liable to head straight to the pet store after work’s over today if the one in these videos is any indication.

Taken from May, the most popular video on this Northern Saw-whet owl’s YouTube page—managed, presumably, by his rarely-seen Japanese-speaking owner—is one in which the little guy perches up atop his owner’s hand and just chills there like a bump on a log while the owner goes about his drawings.

After two months, the video’s climbed to 2.2 million views, but it’s wondrousness is only the tip of the iceberg when it comes to what this owl’s capable of. Here’s the little guy sniffing a feather, and getting his beak cleaned rather forcibly. Want to see him chew on a laser pen? Or maybe you just want to see it stare back at you like you’ve done something terribly wrong.

It’s all possible with this owl, who’s by now officially our favorite owl on YouTube. Apologies to Archimedes.