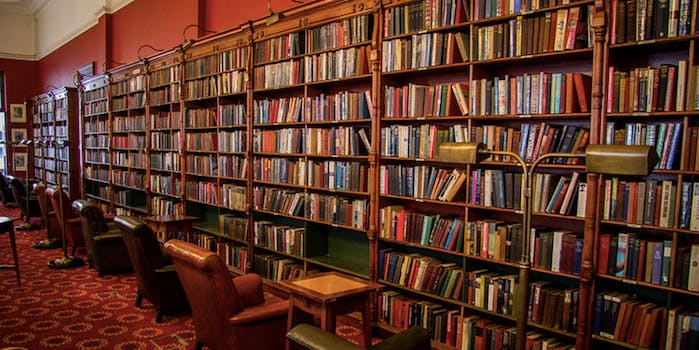 Here are the incredible endings to our #NaNoWriMo novels

Parting is such sweet sorrow.

Another November come and gone, and with it the literary thrill ride of National Novel Writing Month—or #NaNoWriMo to those in the know. Each year, on Nov. 1, thousands of people pledge to do what only a writer as prolific as Wodehouse or Simenon could: finish a novel draft in 30 days.

But plenty of people can start writing a book; how many of them actually reach the ending? Among the Daily Dot staff, seven wordsmiths managed to cross the finish line. To prove it, we offer you the dazzling conclusions of their finely wrought narratives. Warning: spoilers abound!

“Moist,” he replied with a sudden, unexpected certainty that felt like the culmination of 700 years of quasi-immortality and 30,000 miles of open road.

He repeated the world like a mantra, the syllables slowly losing their meaning as they echoed across the expanse of the Grand Canyon—radioactive snow lazily drifting down from the sky onto a post-apocalyptic landscape that finally felt like home. “Moist. Moist. Moist.”

Tears streamed streamed down his cheeks. She wiped them away with the werewolf fur coating every inch of her body. She was getting used to the change; she could get used to anything as long she had him.

—The Moist Talker (Book #4 in the Redundant Trilogy), by Aaron Sankin

She vowed not to NaNoWriMo so hard again as she limped out of his apartment. Still, this was meaningful. She knew he didn’t just NaNoWriMo anyone. He made her feel important; that was important to her.

For so long she’d been held back by fear. Fear of herself. Fear of vulnerability. But getting NaNoWriMo’d changed all that. She couldn’t believe it was as liberating as they said it was.

Losing your virginity is one thing, but getting NaNoWriMo’d was different: more sexual than sex, more intimate than cuddling, more dangerous than skydiving. It was everything and it was also nothing.

She limped for a long time that day, reflecting on NaNoWriMo as a physical act and a philosophical theory. It was a way of life, really, and it could be a way of death. When night fell she found herself at the Manhattan Bridge. After gazing at the darkness of the East River for an extended period of time, she stood on the ledge. For a long time, she shouted. She spoke to no one in particular and only said, “Na… No… Wri… Mo… !” again and again until her throat was raw.

Knowing she had finally achieved her potential—enlightenment some would call it—she jumped, ready to die.

—The Agony and Ecstasy of the NaNoWriMo, by Eve Peyser

And with the reunion complete—and yet somehow left unfulfilled by the initial promise of the grocery-store encounter—he watched her walk away into the snowy night. Back to her bastard husband, the architect, and back to her empty life. He knew he couldn’t stop her, so he didn’t even try.

Bill returned to his car to finish the six-pack. He had tried to reach beyond the emptiness with his high-school lover, but he had grasped nothing but air. The innocence they had toasted was gone, and so was the present. He had nothing to face in the future except a successful musical career and a cold empty bed. He ignited his car and prepared to pull out of his parking space with a lump in his throat and plenty of dust in the air.

That’s when he glanced up at the sky and noticed that all the snow had turned to rain. Thanks, Dan Fogelberg, he cursed to no one in particular. Thanks for nothing.

Finally, Mariah Carey was no longer president. Maybe things would go back to normal.

“I can’t believe it’s all over,” Pepe chuckled as he used his bionic hand to trace his human hand that was tracing his bionic nose. “What’s it going to be like now?”

Leslie just stood there for a moment, taking in her surroundings. The warmth of the sun felt good on her face, reminding her of the time she bobbed for Takis in a bucket full of warm milk. A reminder of the times before the Elusive Chanteuse regime.

“It’s funny. When we met, I knew you were trouble (Taylor Swift™. No copyright infringement intended. Property of TAS LLC Management 2012©.) but I knew you were right,” she said. “And here we are now, all brave new world or whatever.”

She looked over at Pepe. He sharted.

A Twerk to Remember, by Gabe Bergado

He looked at her, smiling like he’d never smiled before, his mouth full of bees stinging his tongue. She knew what that look meant: This is for you. His face reddened and she began to cry, wondering why she was letting him do this.

She leaned in and whispered, “These are not your bees. These are my bees.” She kissed him on the lips and took a great inhale forcing every single bee from his mouth into hers. She closed her mouth and stumbled back.

He cried and reached out for her, but it was too late. She had fallen off the cliff.

—The Land of Milk and Honey, by Evan Weiss

Sondra could only nod.

They were the only two left standing—if you can call that standing—following months, years of carnage that preceded this moment. And what did they have to show for it? A basket of pitted fruits—the very pitted fruit that sparked the ill-fated revolution. Clarence guided one of the juicy purple orbs to his mouth, hoping to at least quell the hunger that’d become all too normal.

“If I’m gonna die, I’m gonna die with a full stomach,” he said in defiance of their pact. Sondra joined. Their first bite of the plums released a purple haze that clouded their faces. Both Sondra and Clarence screamed in horror as they watched each other’s faces bulge and boil, becoming bubbly blobs before bursting. Still alive, Clarence fingered his eyeless skull sockets, his last attempt in vain to survive, but he knew he died years ago when he let it all happen; when he caused the thing that started the revolution that they ultimately lost.

As the haze lifted, all that was left of the two freedom fighters was a pile of bones, dust, and what would have been feces had they not given up their intestines at the onset of the revolt. Every building was rubble; every car had finished burning ages ago. The only sign of life in Green Bay hopped across the road of corpses, past Clarence and Sondra.

“Ribbit,” it said with a smirk.

—Ribbit in Rubble, by Feliks Garcia

So we beat on, boats against the current, borne back ceaselessly into great prices on khakis.

—The Great GAPsby, By Miles Klee