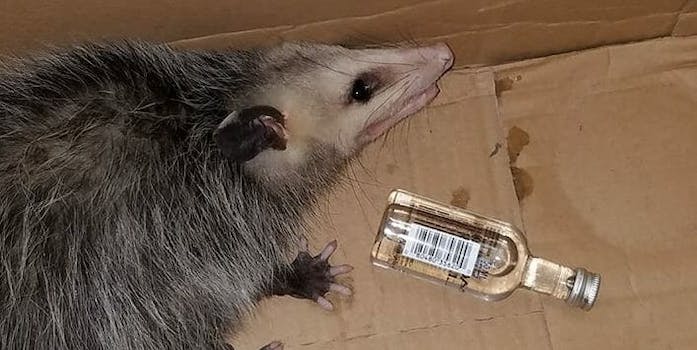 The hangover must have been brutal.

The life of the humble opossum can be a hard one, fraught and full of uncertainty. Anyone who’s ever downed a few too many gulps of bourbon, however, can probably relate to the plight of one such Florida opossum, who got more than a little sauced last week and had to be taken into wildlife care.

According to Time, employees of the Emerald Coast Wildlife Refuge got acquainted with the drunken female opossum on Nov. 24, when she was brought in for care by a police officer. She was reportedly found in a Florida liquor store, where she was spotted next to a broken bottle of bourbon that was entirely empty.

While it’s unclear exactly how much of the liquor she slurped up, an employee of the refuge center, Michelle Pettis, told the Panama City News Herald that she appeared to be sloshed.

“A worker there found the opossum up on a shelf next to a cracked open bottle of liquor with nothing in it,” she said. “Assuming the opossum drank it all, he brought her to us, and we looked over her and she definitely wasn’t fully acting normal.”

Opossum in Florida gets drunk after breaking into liquor store https://t.co/a2e7ZUiSXW

Pettis told the paper that the refuge center got some fluids into the opossum and successfully nursed her back to health over the course of a few days.

The owner of the liquor store, Cash Moore, told the Panama City News Herald that the animal was, to the best of his knowledge, of legal drinking age. He reportedly described it as the first time an animal had broken into his store and gulped down some of his wares, which is probably for the best―from the sounds of things, the boozy gal needed to recover from quite a hangover before she could handle things on her own again.