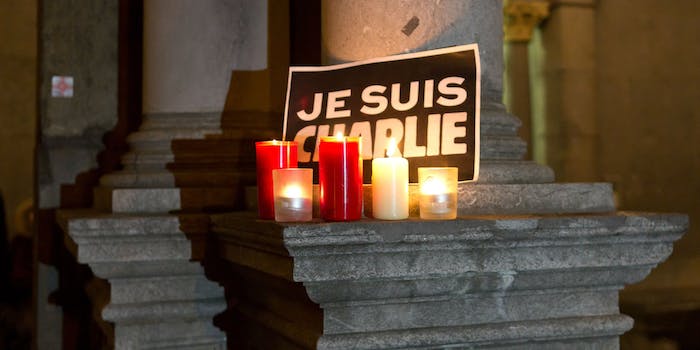 One year after the Charlie Hebdo attack, we are still #JeSuisCharlie

The magazine lives on, and so does freedom of speech.

January 7th marks the first anniversary of the Charlie Hebdo shootings in Paris that left 12 dead and 11 wounded. As we reflect on the greater meaning of the tragedy that occurred that day, a series of complex lessons present themselves, encompassing many of the most crucial issues facing the United States today—from the importance of defending free speech to the need for pluralism and tolerance toward marginalized peoples everywhere.

After describing the magazine’s long tradition of religious and political iconoclasm, former Charlie Hebdo employee Caroline Fourest recalled in a recent op-ed for Politico how many media outlets “stabbed us in the back: By lying about our intentions, refusing to explain the chronology of events and the context of our actions, and by echoing the same accusations we heard from fanatics themselves.” Even as the Western world united in its horror at the atrocities perpetrated by the Muslim terrorists that day, many also insisted that Charlie Hebdo had committed an atrocity of its own—namely, that of micro-aggressing against a non-Western religious group. “The despicable accusation that Charlie was ‘Islamophobic’ was not only wrong,” Fourest declared, “it had killed and continued to puts its survivors in danger.”

While it’s easy to express sympathy with the victims of the Charlie Hebdo shootings, as well as express horror at the villainy behind the attacks themselves, it’s much more difficult to appreciate the ideological importance of rallying behind that magazine’s right to offend.

The larger point here doesn’t merely apply to the specific issue of Muslims and Islamic terrorism. At its core, this entails every situation in which the principle of protecting free speech–one that is essential to the success of any liberal democracy–runs athwart the central assumption of those who are politically correct, namely that offensive language should never be permitted. Writing about campus efforts to stifle conservative ideas on race and gender, left-wing pundit Jonathan Chait of New York magazine observes that “they are carrying out the ideals of a movement that regards the delegitimization of dissent as a first order goal. People on the left need to stop evading the question of political correctness—by laughing it off as college goofs, or interrogating the motives of PC critics, or ignoring it—and make a decision whether they agree with it.”

While it’s easy to express sympathy with the victims of the Charlie Hebdo shootings, as well as express horror at the villainy behind the attacks themselves, it’s much more difficult to appreciate the ideological importance of rallying behind that magazine’s right to offend.

While it just so happens that Charlie Hebdo had a left-wing political slant, it could have very easily been a libertarian or right-wing publication that was targeted by Muslim terrorists for offending them (see the jihadist threats made against South Park in 2010). In the end, regardless of the philosophy being assailed, it is critical that Americans who wish to honor Charlie Hebdo do so by defending the right of all future Charlie Hebdos to offend whomever they wish, on whatever grounds they choose. If we feel that those positions are wrong or hateful, it behooves us to speak out against them—but, even as we do so, to recall that finding certain views appalling does not justify silencing those who express them. This distinction is all-important in the aftermath of the Charlie Hebdo shootings.

Similarly, even as the movement to curb our First Amendment rights in the name of stopping terrorists continues to gain momentum, it’s important for those of us who use social media to embrace that medium’s potential as an outlet for unfettered self-expression. Thankfully, a Supreme Court ruling in June has clearly established that even controversial speech on social media is protected by the First Amendment unless it meets a high preponderance of evidence that it constitutes a threat. Even though the Internet can often stifle freedom of expression by targeted shaming campaigns against those widely deemed to be bigoted, individuals who won’t allow themselves to be intimidated by that type of bullying can find in social media a welcome outlet for articulating their viewpoints on a number of subjects. Although the enemies of free speech can target publications like Charlie Hebdo, they can’t logistically go after every single person who dares criticize them online. Just as it’s important to protect free speech for others, so too is it vital that we vibrantly practice it ourselves.

If we allow the fear-based stereotypes of Muslims to override the objective reality about Muslim Americans, we’ll not only betray our own values—we’ll also give terrorist groups like ISIS exactly what they want.

At the same time, it’s also essential that we be wary about allowing our opposition to Islamist terrorism to devolve into bigotry against Muslims. As Republican presidential candidate Donald Trump’s controversial comments clearly demonstrate, there are many Americans who are either unwilling to or incapable of distinguishing between the specific individuals responsible for taking innocent lives and the roughly 1.6 billion Muslims in the world as of 2010 (including 2.6 million who live in the United States). Among American Muslims, polls find that 48 percent don’t feel their own religious leaders have done enough to speak out against extremism, 52 percent have many non-Muslim friends, and 70 percent prefer the Democratic Party and its liberal political agenda (such as 68 percent believing in a bigger government that provides social services to help the disadvantaged). Although as a whole American Muslims are more religious and socially conservative than the national mean, they are no more so than right-wing Christians in this country.

Indeed, if we allow the fear-based stereotypes of Muslims to override the objective reality about Muslim Americans, we’ll not only betray our own values—we’ll also give terrorist groups like ISIS exactly what they want. “This is precisely what ISIS was aiming for—to provoke communities to commit actions against Muslims,” explained University of Maryland psychology professor  Arie Kruglanski in an interview with the Washington Post. “Then ISIS will be able to say, ‘I told you so. These are your enemies, and the enemies of Islam.’” It’s important to remember that the attacks on Charlie Hebdo weren’t purely emotional in origin; the perpetrators, in addition to wanting to harm those who had spoken blasphemously about their faith, also wanted to present themselves to the rest of the world as the face of modern Islam. When Americans indulge in base Islamophobia, we allow that to happen.

These lessons may seem somewhat paradoxical—that is, to simultaneously champion offensive speech while cautioning against the propagation of anti-Muslim bigotry. That said, we live in a particularly nuanced period of history, and the correct answers to the problems that face us can’t be summed up in a single meme or hashtag. It is wrong to condemn billions of people based on the heinous deeds of a few of their coreligionists, and if we succumb to that impulse, we will only empower our enemies while undermining our own values. At the same time, if we go to the other extreme and become censorious toward inflammatory rhetoric of all kinds, we’ll likewise betray our ideals while empowering those who wish to destroy them.

These are difficult times, and as we acknowledge the first anniversary of Charlie Hebdo, the best way to honor the victims’ memories is to accept that fact—as well as the complicated message that accompanies it.