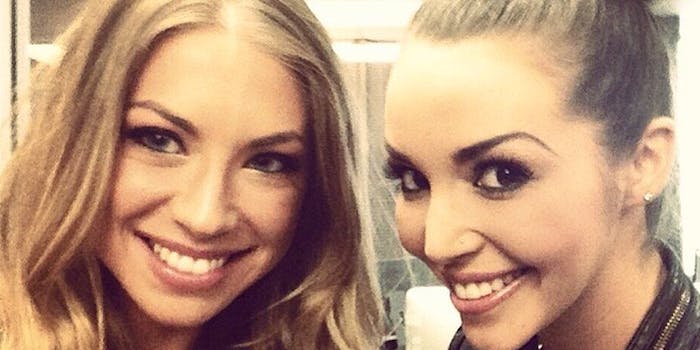 “On the Rebound” uses Facebook science to find you a date

Is "On the Rebound" the new "Bang With Friends?"

Suffering from a traumatic breakup and need a rebound to console yourself? There’s an app for that.

On The Rebound, a newly released Web app that syncs with your Facebook account, scours your friends to find the most vulnerable and weakened friends who are single and ready to mingle. It uses purely scientific data distilled from the social networking site to see which of your friends recently broke up and are “primed for a hookup.”

Sleeker than its crass-sounding competitor Bang with Friends, the attractively designed site follows a similar methodology. After you log in to the site via Facebook, it trawls through your account, scoping out your friends’ past relationship statuses, then serves up a list of so-called friends who probably want to sleep with you. 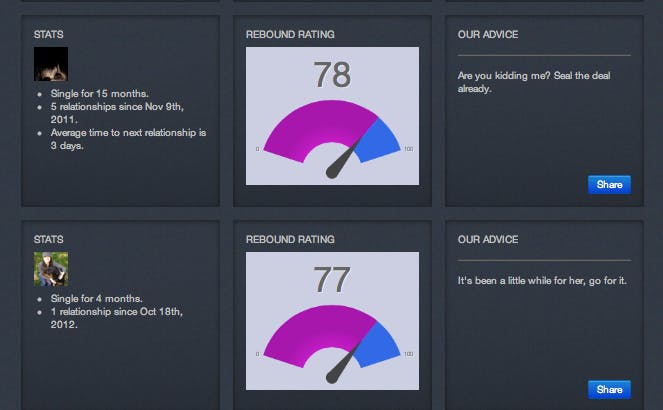 Notably, it creates a list for both sexes, if you need to double your dating pool, and it also promises not to reveal any information on your wall —since that would be super embarrassing.

After the lists are assembled, there’s a “rebound rating” from 0 to 100, where all that #science is used. The app also offers stats like your friends’ average time in a relationship and the time since they were last in one. Advice is also dished out in another box, offering guidance about whether the person is ready to be poached.

And the results are… varied. Since we would never, ever want to date one of our friends, we asked @YourAwayMessage creator Caroline Moss to test the app for us. She said it found her a gay guy, her science partner from ninth grade, a dude from her hometown that is now sitting in jail, and her cousin.

“I think it’s less of a gateway app for dating,” said Moss via Gchat. “And more of a way to scratch your head at whatever algorithm that determines who on Facebook can be defined as ‘looking for love.'”

That’s a thought On the Rebound creator Anthony Coombs echoes. In an email to the Daily Dot, he said the site was created to be entertaining and tongue-in-cheek. But, he said, that’s not to stop you from taking the site seriously since it’s backed by data from Facebook’s Graph Search and research.

“We spent about three months researching and interviewing relationship experts from across the country and Canada to get an understanding as to how age, gender, sexual preference, timing in relationships, and duration of past relationships affect a person’s willingness or timing to enter into a new relationship,” wrote Coombs.

Stating that the results served to users are “accurate,” Coombs said the site’s usage of Facebook data should be of interest.

“We created a clever little way to extract data long since thought gone and use it in a way no one ever thought,” he said.

As for Moss, well she’s never, ever getting back together with On the Rebound. “I don’t think i’d ever use it as a way to ‘get ideas’ about who i should be dating,” she reasoned.