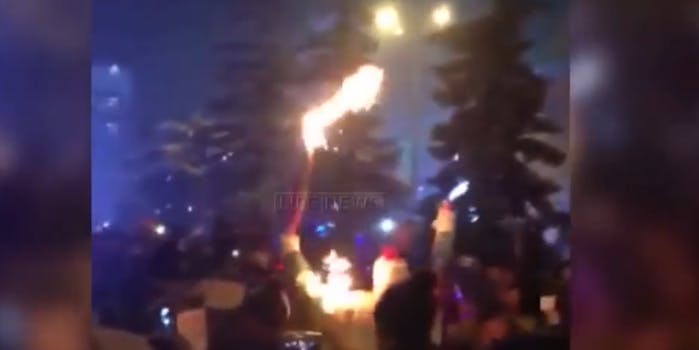 Not even a brush with fire kept Pyotr Makarchuk kept from holding the Olympic torch up high.

Bobsledder Pyotr Makarchuk became famous in Russia for excelling in numerous track-and-field events, including Fire and Rescue sports, a pastime developed in Russia in the ‘30s in which competitors perform various grueling feats connected with the harrowing tasks required of real firefighters.

But that didn’t prepare him for the startle that accompanied his turn carrying the Olympic torch.

On Wednesday, he was carrying it through the city of Abakan in his native region of  Khakassia, Russia, when liquid gas fell onto his sleeve and caught on fire while onlookers watched. Luckily for Makarchuk, Olympics escorts quickly doused the fire.

Footage of the incident has been making the rounds ever since Russian site Life News uploaded it.

And Makarchuk is no stranger to injury—a serious knee injury almost kept him out of his final Olympics bid. Instead, his recovery and competition in the 2006 Turin Olympics made him a national hero.

This is hardly the first incident to plague the Russian torch so far, according to the Moscow Times. Torchbearers have had to relight it “dozens” of times, and a 13-year-old girl allegedly had one torch explode in her hands in October, burning her. Authorities denied the claims.