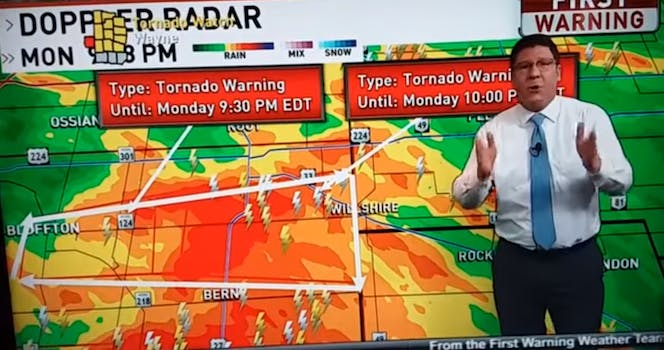 As tornadoes devastated Dayton, Ohio, on Monday night, Fox 45 weatherman Jamie Simpson was on the job. But his viewers were apparently more interested in reality TV, and Simpson made time to call them out for being selfish.

He said people on social media were complaining that tornado coverage interrupted ABC’s The Bachelorette, and so in a viral clip, Simpson addressed the disconnect.

“No, we’re not going back to the show. Folks, this is a dangerous situation,” Simpson said. “Our job here is to keep people safe and that is what we’re going to do.”

Simpson added: “Stop. I’m done with you people. This is pathetic. This is a dangerous situation here.”

And finally: “It just really bothers me that we have people who don’t care about other people’s safety around here.”

According to NPR, the tornadoes left “catastrophic” damage in Dayton and left the area under a boil-water advisory.

To his credit, Simpson has spent the morning tweeting weather news and ignoring his newfound viral fame. Even the Bachelorette herself, Hannah Brown, chimed in.

Lolz too funny, thanks Dayton, Ohio for the love, but be safe. naders are no joke. https://t.co/RdxYOUpx4w

According to Newsweek, The Bachelorette will re-air in its entirety in Dayton on Tuesday afternoon because so much of it was preempted by emergency coverage. As the National Weather Service points out, 5 million Ohio residents are affected by power outages in the state.