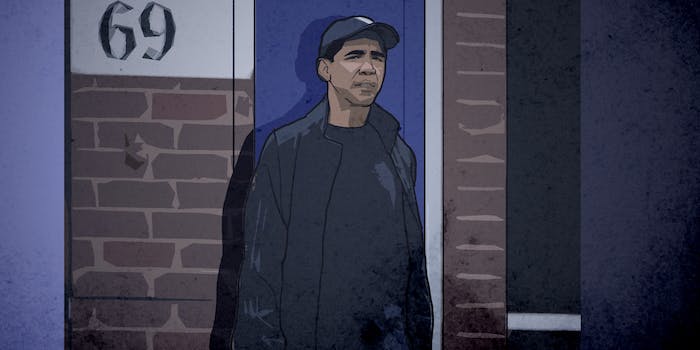 When Barack Obama leaves the White House next January, he’ll be remembered for a number of contributions to American life: the Affordable Care Act, a major economic recovery, and… drone warfare. A president’s fashion sense is secondary to his executive orders and Supreme Court appointments, and yet, here is a very good and insanely popular tweet about it:

Barack dressed like he only text you after 2am pic.twitter.com/cah7hXjzBd

Meet your Mancrush Monday: Barack is the leader of the free world, but he’s dressed like a real guy you know, and he’s boldly posing in front of a 69 (the sex number). Nice. Your fave president could never.

This tweet went up on Labor Day and is now all over the place, but the original photo isn’t new. It’s a press pool shot from 2009, showing a “young and healthy” Obama leaving a basketball game at Fort McNair.

It’s also not Photoshopped: Fort McNair really does have a building 69, (which, according to an official map, is a fitness center and not a sex building).

Cut Barack some slack, though. Can’t a dude wear workout clothes to work out? If you’re going to make fun of a president for his workout clothes and imaginary texting habits, may I suggest former president Bill “U Up?” Clinton, who won’t stop texting you during work and wears these shorts?