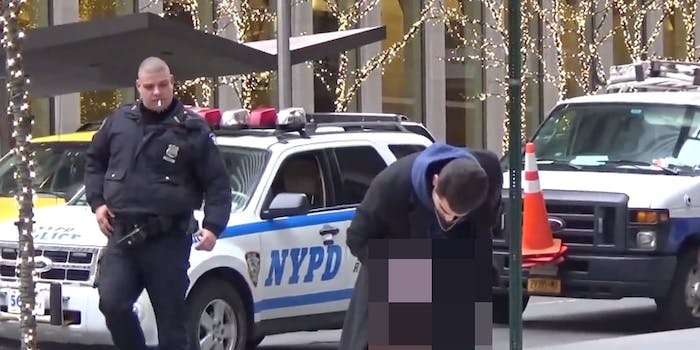 This looks NSFW, but it's actually not at all.

Welcome back to the sick sad world of YouTube pranks, where 20 million dudes with Cheetos-stained fingers laugh alone to videos of sexual harassment.

Roman Atwood, the reigning bro-king of the prank scene, is perhaps best known for a sketch in which he uses a Shake Weight in front of cops so it looks like he’s strokin’ his D. Police walk by, point, and get ready to accost the rogue masturbator. Then they see he’s just working out his forearms like a normal human. They laugh and move on.

Here’s the New York City version, brought to you by Model Pranksters. Instead of a Shake Weight, they’re shaking what looks like kale smoothies—a staple of the modern-day yupster Brooklynite.

Turns out there’s a lesson to be learned here: NYC is a very different place to pretend to jerk off in public! People actually get upset. Cops don’t just LOL and walk away—they tell you to get the hell away from here.

Sexual harassment in New York, and anywhere, is a big freaking deal. Virtually any woman you meet in the city could share horror stories about being cornered (or worse) by public masturbators, on the subway, on the street, in elevators, in their apartments.

Yet bros on YouTube continue to use the methods of abusers for easy jokes. The prank scene has turned into a game of one-upmanship—they’re literally whipping it out to see whose is bigger, who can harass the most people, who can get away with more and more abusive stunts. Stunts whose premises are based on real scenarios of child abuse and sexual assault. Stunts like:

In the YouTube prank world, the kindest pranks on women are just your run-of-the-mill objectification, like pretending to sneeze off women’s dresses in front of strangers. But at least then they’re in on the joke, not the butt of it.

It’s nice to see some NYPD officers take “Jerking Off in Front of Cops Prank!” for what it is—street harassment. But many in the video act just like you’d expect young men to respond: with a fist bump and a LOL.