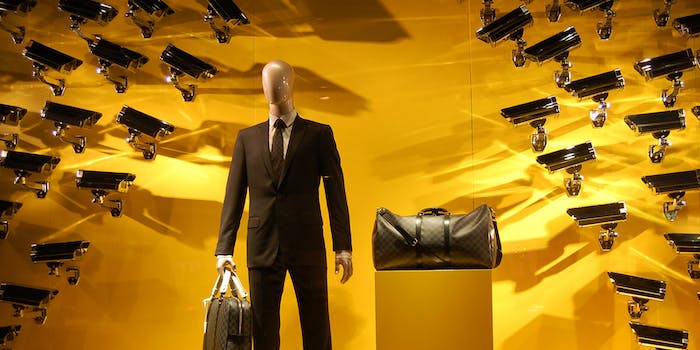 If the NSA didn't watch you, it would have no reason to exist.

At a time when privacy can never be assumed, the Patriot Act feels like an aging artifact of a bygone era. Passed in the wake of a tragedy people old enough to vote aren’t old enough to remember, the Patriot Act gives legal justification to the mass surveillance of American citizens, a National Security Agency program whistleblower Edward Snowden unearthed back in 2013. When not even our dick pics are safe from federal eyes, the effect of this 14-year-old law on our privacy and liberty should never be forgotten.

A key provision of the Patriot Act, however, faces a crucial cutoff point that seems like it should end federal surveillance. Section 215, which grants the federal government authority to request customer records from any business for reasons related to terroristic activity, will reach its “sunset deadline” on June 1 of this year. A spokesman for President Obama’s National Security Council called the surveillance program “a critical national security tool,” but he admitted that if Section 215 is allowed to expire, the government “will not continue the bulk telephony metadata program.”

This should be great news for privacy advocates that have fought the Patriot Act for nearly 14 years. Allowing Section 215 to die out would prove one of the many crucial steps to ending the War on Terror that has wreaked havoc on our civil rights. But before activists celebrate the death of surveillance, they should remember that federal government rarely loosens its grip upon power it has gained, and the ability of the federal government to collect information on hundreds of millions of Americans is no different.

Before activists celebrate the death of surveillance, they should remember that federal government rarely loosens its grip upon power it has gained.

As Zack Whittaker of ZDNet reports, a recently declassified court document reveals a Foreign Intelligence Surveillance Court (better known as a FISA Court) has ordered federal agencies to develop a legal framework for continued approval of surveillance programs past the June 1 deadline. Essentially, it’s entrusting the National Security Agency to give up the authority that has granted it untold ability to surveil Americans and foreign nations with impunity, a proposition the NSA is very unlikely to take; you don’t build the world’s largest spy data center just to give it up on a legislative technicality.

What the court order does do is request the NSA “provide a legal memorandum…addressing the power of the Court to grant such authority beyond June 1, 2015.” In much the same way the Bush Justice Department drafted a secret memo to justify torture or the Obama administration created similarly tight-lipped legal reasoning for its use of drone warfare abroad, the NSA will simply move its justification for the bulk collection of data from the vague controls of Section 215 to an entirely secret document that neither you nor I will see for years.

To understand why the National Security Agency will never give up its bulk collection, it’s very important to understand the relationship between these courts and the agents tasked with collecting all of this data. All requests for surveillance of American businesses or citizens under Section 215 are supposed to be approved by a FISA court hearing, the “oversight” oft cited by President Obama in his defense of the NSA programs.

But FISA judges can hardly be considered cold arbiters with the rights of average Americans at heart: In the year before Snowden leaked details about the bulk metadata program, the FISA court approved every single one of the 1,856 requests it received from federal agencies. This rubber stamp status is also shrouded in secrecy; despite the existence of FISA courts for almost four decades, the request by the NSA for millions of Verizon customers’ data detailed in Snowden’s leaks remains the only such request seen by the public.

FISA judges can hardly be considered cold arbiters with the rights of average Americans at heart.

This private partnership between the executive and judicial branch means the NSA—and intelligence agencies as a whole—acts under the auspice of oversight but never truly faces the sort of rigorous examination one would assume such a massive program should have. The spying powers of the NSA are not simply enhanced by this relationship—the agency relies entirely on court approval of its actions. Even after Section 215 ends in June, the same FISA courts that have approved such egregious breaches of Americans’ expectation of privacy are now entrusting the NSA to justify its own legal existence.

To understand how the agency might do so, one simply needs to look into how the NSA justified mass surveillance before the Patriot Act. Much like the Patriot Act, the NSA has relied on post-9/11 fear of terrorist activity to enable itself to violate the Fourth Amendment rights of millions of Americans. The chairman of the House Permanent Select Committee on Intelligence Devin Nunes warned lawmakers would hurt the NSA’s “daily mission to protect the Nation from terrorist attacks” if they allowed Section 215 to expire. However, the NSA’s purview has hardly been limited to the activities of terrorists.

In fact, the mass collection of American phone records began nearly a decade before 9/11 even happened and had nothing to do with terrorist networks. Starting in 1991, the NSA and the Drug Enforcement Agency shared data to collect phone calls made to numerous countries in South and Central America, including Mexico, Colombia, and Brazil. The agencies collectively gathered billions of phone calls in a search for drug trade suspects. In a 1998 letter to Sprint requesting customer data, the Justice Department called the program “one of the most important federal drug enforcement initiatives.”

The NSA’s purview has hardly been limited to the activities of terrorists.

The justification the NSA provides to FISA courts or the American public are truly meaningless. The NSA knows it will likely only ever face the scrutiny of a rubber stamp from a judge or the oversight of an increasingly useless Congress (a body that allows the director of the NSA to admit he lied to their face). The NSA merely needs to fill in the blank, as if federal regulation were some twisted Mad Lib. Two decades ago it was drugs, currently it’s terrorism, and in two more decades, it could be anything else—human trafficking, an illegal arms trade, or the actions of the next boogeyman dictator.

It’s not just that the NSA wants to keep spying on Americans. The truth is more existential: If the NSA didn’t watch you, it would have no reason to exist.