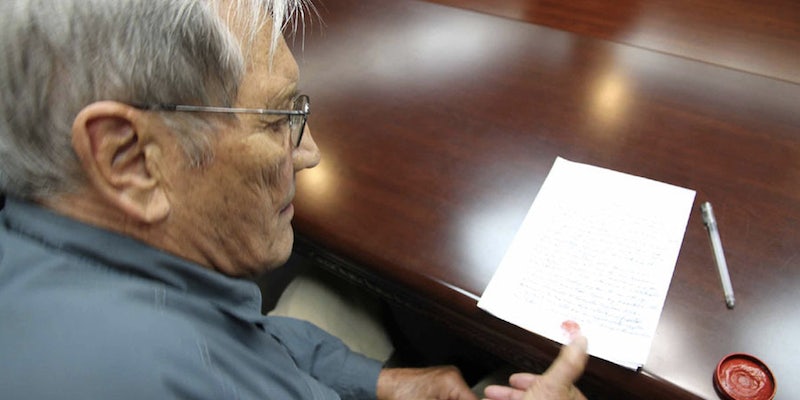 In a harrowing, bizzare video, the retired veteran "admits" he came back to North Korea to pass messages to embedded spies and terrorists.

The circumstances surrounding the capture of Merrill Newman, of Palo Alto, California, are bizarre and vague. Various news reports show that Newman, a veteran of the Korean war, was travelling with a friend and two guides on a nine-day tourist visa, then arrested on the plane as it prepared to leave Pyongyang. At the time, it wasn’t clear why Newman had been arrested, or what the North Korean government intended to do with him.

But that appears to be partly answered by KCNA, North Korea’s state-run news network. In a statement Saturday, KCNA claimed Newman had come to the country because he felt his mission wasn’t quite done. In addition to “slandering” North Korea’s “socialist system,” the agency claims, Newman “also committed such crime as trying to look for spies and terrorists who conducted espionage and subversive activities against the DPRK [Democratic People’s Republic of Korea].”

It also released a video “confession” given by Newman. Strangely and abruptly spliced together, the video shows him reading a statement in a conference room, which he then signs and stamps.

The only clear element of Newman’s statement, whose odd syntax indicates it wasn’t written by a native English speaker, was his conclusion: “on this trip, I can understand that in U.S., in western countries, there is misleading information and propaganda about DPRK.”

At the end of the video, it’s clear that his confession is stamped Nov. 9.

In the much longer written statement, which the agency also released, Newman allegedly admitted to “a long list of indelible crimes against DPRK government and Korean people.”

Newman’s wife, Lee, previously told CNN that he had gone to put some “closure” on his time in the country. He hasn’t been heard from since the date of the statement, and his current whereabouts are unknown.